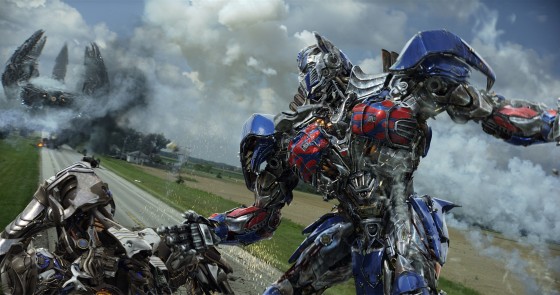 Taking a few years off and making the god awful Pain & Gain, Michael Bay has returned to his cash cow with the fourth entry in the Transformers series, which is basically a soft reboot of the franchise, getting a new cast of human and Transformer characters with only Bumblebee and Optimus as the only threads to the original trilogy.

Attempting to explain the plot of this movie is an impossible task, as it may be the most incomprehensible of the entire series.  There’s an element called, wait for it, Transformium that is being used by Stanley Tucci to create T-1000esque Transformer clones, Kelsey Grammar is leading a CIA kill squad that is targeting all Transformers, not just Decepticons, an alien bounty hunter is after Optimus on a mission for the mysterious creators of the Transformers and stuck in the middle is your normal, all-American inventor/jock/single dad/action bad ass Mark Wahlberg, his annoying, vapid daughter and her Irish(?) drift racing boyfriend.  This movie is 3 HOURS LONG and it still barely addresses any of these plots in any substantial way and things just randomly happen that are never mentioned again. By the 2nd hour (again this movie is 3 GODDAMN HOURS LONG) you are so desensitized by incoherent action and McGuffin gibberish that it’s a struggle to stay focus and not have your eyes glaze over.   It also ends on possibly the weirdest note of the series.

The acting is slightly improved in Age of Extinction, but that’s not saying much when you are talking about Michael Bay.  Kelsey Grammar and Stanley Tucci take turns devouring scenery as the main antagonists, with Grammar being psychotically evil and is leading a CIA that in the Bayverse (TM) operates with absolutely no consequences and with absolute autonomy.  Titus Welliver, from Lost and The Town, among other things, is Grammar’s main henchman and is equally as sadistic, willing to murder Wahlberg’s daughter to find Optimus.  There’s some BS about his sister being killed during the Battle of Chicago but I don’t really see how you make the leap to murdering children from that.  Mark Wahlberg is seemingly doing a parody of Mark Wahlberg as Cade Yaeger and he’s in a constant state of frantic, wild eyed panic or excitement depending on the situation.  His character is also just as fluid as the new Decepticons, there’s no consistency and he shifts from nerdy inventor to gun toting bad ass as the script dictates.  TJ Miller shows up briefly and does his usual sidekick thing, which is fun if you know what his schtick is but may be annoying if you don’t.  It’s barely worth mentioning Nicola Peltz and Jack Reynor as Tessa Yaeger and Shane Dyson respectively, who are completely useless and their relationship and Cade’s annoyance with it is ground into the dirt by the end of the movie.  Peter Cullen returns as Optimus and John Goodman and Ken Watanabe are some of the new voices, playing Hound and Drift respectively and they are OK, although Drift’s insanely stereotypical “samurai” personality gets a little cringe inducing at times, but nowhere near the level of the Twins from Revenge of the Fallen.  Mark Ryan, from Black Sails, plays the main robotic antagonist, Lockdown, who is a Cybertronian bounty hunter with no allegiance to either faction and would probably have been an interesting character if there was even the slightest attempt to explain his character but he just arrives with a massive ship, weird Transformer dogs, minions and captured aliens, all of which are presented without comment.

Action wise, there’s really nothing that you haven’t seen in the 7+ hours of the previous Transformers movies.  It’s all the same slow motion, spinning and jumping, stabbing, missile launching from all the previous action sequences, but this time they seemingly go on forever until they lose all meaning and any excitement they might have generated evaporates.  The big selling point of the movie was supposed to be the Dinobots but *spoiler* they don’t show up until maybe the last 30 minutes and don’t really do anything except give Optimus and the Autobots a lift back to Hong Kong.  The reveal and the actions of the Dinobots just fall completely flat and they are one of the many things that just show up with no explanation in this movie.  Galvatron also makes an appearance as one of the clones created by Stanley Tucci’s company and he creates an army that can shapeshift in a faster and more advanced way than the normal Transformers but the effect looks terrible and the movie seemingly just gives up and eventually just lets the Autobots kill them like normal.

If you want nothing else than to see brightly colored things shoot each other and explode, by all means give up your entire day and go see Age of Extinction.  For everyone else, it’s an exhausting slog through more of the same incoherence that you’ve come to expect from all but the first Transformers movie, which is still far and away the best of the bunch.  It’s not the worst movie of the summer but it’s close.