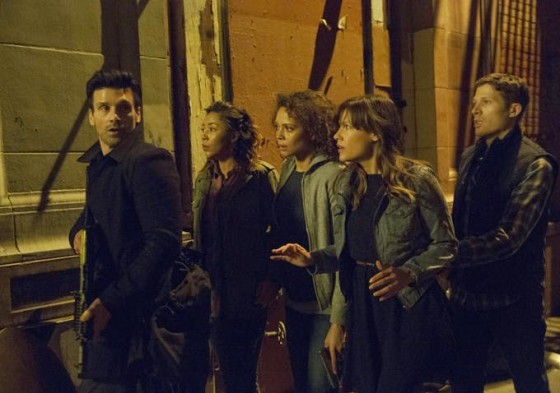 Last year The Purge was surprise summer hit by basically suckering people into a terrible home invasion horror movie with a cool B-movie premise of one night a year madness in a bizarre future America.  There seemed like cool things happening outside but unfortunately we were stuck with Ethan Hawke’s boring family for the whole movie.  Capitalizing immediately on the success though, The Purge: Anarchy is out basically a year later but with an actual budget, a change of location and a shift more toward action, it’s actually a huge step up from first movie.

A quintet of people find themselves trapped on the streets of LA during the Purge and they try to survive the 12 hours of murderous insanity. Liz and Shane (real life coupe Kiele Sanchez and Zach Gilford) are a couple on the verge of divorce when their car breaks down right as The Purge begins, single mom Eva (Carmen Ejogo) and her daughter Cali (Zoe Soul) are dragged out into the street by armored thugs to be killed by a man with a high tech, heavily armed tractor trailer called Big Daddy (Jack Conley) but they are rescued by highly proficent Sergeant (Frank Grillo), who’s using the Purge as an excuse to get revenge on the man who killed his son.  The plot is basic but it at least keeps moving and there isn’t really any down time once the Purge starts, which is what you would probably want with a movie like this.  There’s some mythology building scattered throughout as there’s a resistance group led by Michael K. Williams who are trying to get people to fight the New Founding Fathers, who are using The Purge to get rid of the poor, homeless and other undesirables.  A lot of that seems like it’s being set up for another sequel though, as it doesn’t really effect our group until the very end of the movie.

Frank Grillo, as usual, is fantastic and probably the main reason to see the movie.  He’s basically The Punisher and it’s a little disappointing that he’s now Crossbones in the Marvel Cinematic Universe, because I think he would make an excellent Frank Castle.  He goes through a fairly typical arc of being out for himself to start but redeeming himself by helping the others but he does it in such a great, bad ass way and he gets plenty of chances to take out crazed Purgers in the movie.   The rest of the characters are OK, if kind of annoying, but Grillo is carrying the movie.

The first Purge was a home invasion horror movie a la The Strangers or Funny Games but Anarchy is an action movie a la Judgement Night or The Warriors (nowhere near that classic, though).  It’s much less jump scares and more shootouts and fights.  There’s decent action throughout with a couple of standout, cool sequences, with the highlight being when the group is captured and put into an “auction” for rich Purgers to pay for the chance to hunt them in an underground arena.  A lot of the gore, one of the selling points of the movie, is pretty lame CG blood and it definitely would have added to the B-movie charm of the movie if they had used actual squibs and practical effects.  The two main antagonistic groups hunting down our group also don’t really get that satisfying of resolutions for the amount of build up they get in the movie.  There’s also a lot of questions still about how this universe works, like why is The Purge almost exclusively just for murder when “all crime” is legal?  Why is no one looting, doing tons of drugs, having orgies or other things to work off their supposed aggression?  The New Founding Fathers are also still this kind of vague, evil force and I really want to know how they got elected and convinced the public to start murdering each other.

If you got burned by the first Purge, Anarchy is definitely what I think most people wanted from the first, especially with it’s premise.  Frank Grillo is awesome as usual and it’s a decent action B-movie.  I don’t know if it’s worth rushing out to theaters but it would definitely be a solid rent when it comes out on DVD/Blu Ray.