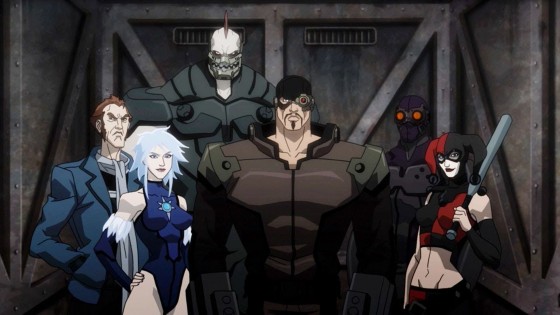 The DC animated movies take a break this go around from adapting specific comic storylines featuring Batman or the Justice League for a story set in the universe of the Arkham video games with Batman: Assault on Arkham.  Even though his name is the title though, this is first and foremost a Suicide Squad movie.

Using the New 52 configuration of the team, Amanda Waller (back to her plump, bad ass self in the Arkham universe) sends Deadshot, Captain Boomerang, Killer Frost, Black Spider, King Shark and Harley Quinn on a mission to break into Arkham and recover the head of The Riddler’s cane, which contains a thumb drive with the identities of all present and future Squad members.  The Joker has also someone managed to get a dirty bomb planted somewhere in Gotham, even though he’s locked up in Arkham (should be noted this movie takes place between Origin and Asylum in the game universe).  The movie perfectly captures the feel of the Squad, who take every opportunity to stab each other in the back and could at any moment get their heads exploded by Waller.  There’s lots of great bickering between the team, mostly from Harley Quinn, who’s easily the most dynamic member of the team.  You can definitely tell it’s not Arleen Sorkin or Tara Strong but Hynden Walch does a good job of setting the right, crazy tone.  The best part of this animated movie for Batman fans is that the true Batman is back, Kevin Conroy, who should never not be voicing Batman.  Neal McDonough does a decent job as Deadshot, getting the bad ass part down but lacking a little charisma side, as Floyd is deadly serious the entire movie.  Voice acting vets Jennifer Hale and John DiMaggio give some fun performances as Killer Frost and King Shark, respectively, with DiMaggio in particular making King Shark a lovably dumb brute, even when he’s horrifically murdering people. Since we’re in the Arkham game universe, Nolan North provides his cockney Penguin voice for a scene when the Squad gets supplies from Oswald Cobblepot and Troy Baker voices The Joker, as he did in Arkham Origins.

The fact that the Suicide Squad is full of terrible criminals lets the movie take the opportunity to push the envelope of PG-13 with lots more violence and even sex (Harley and Floyd have a pre-mission roll in the hay that Harley uses to taunt The Joker with later on) than previous DC Animated movies.  Three of the Squad suffer the head explosion promised by Waller if they step out of line.  The Joker does his usual twisted killing and he and Deadshot have a brutal fight toward the end of the movie.  The fights and action overall in the movie are pretty great but they don’t really take advantage being in the Arkham universe except for an opening fight where Batman takes down a squad of Waller’s men that sort of invokes the way you chain combos in the Arkham games.  Batman never really has an opportunity to do an Predator style takedowns in the movie but he does go undercover in very cool way toward the middle of the movie.  The movie is also jam packed with references and cameos from most of the Batman rogue gallery but it’s strictly fan service, as all of them except Penguin don’t factor into the main plot at all.  The coolest bit of fan service is probably when Batman has a fight with Squad in what is basically the Arkham equivalent of the warehouse from Indiana Jones, as there are boxes full of weapons and gadgets from pretty much every villain in the Batman universe, even guys like Maxie Zeus.

If you’re a fan of the Suicide Squad, this is a must watch as they finally get the chance to shine while at the same time you also get a standard but cool Batman vs Joker plot as well.  The voice acting and action is great and it’s even a little edgy, as far the DC Animated movies go, so definitely worth checking out as soon as possible.