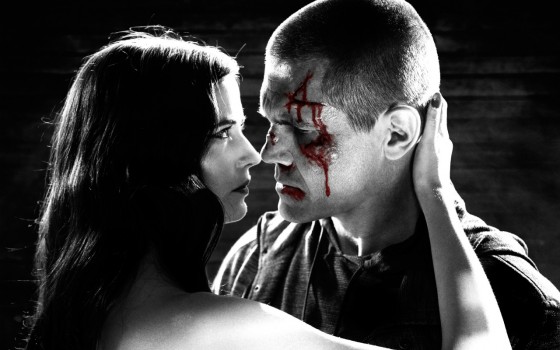 The original Sin City came out 9 years ago and was striking with it’s visuals and use of green screen.  Now that the look it pioneered is common place, A Dame to Kill For feels kind of generic and meh.

Taking part partly before the original Sin City, partly afterwards, the movie follows Marv, (Mickey Rourke) who acts as muscle for the various characters in the movie, Dwight (Josh Brolin), who gets drawn back into the world of his power hungry former flame, Ava Lord (Eva Green), Johnny (Joseph Gordon Levitt), a gambler out to prove himself Senator Roarke (Powers Boothe) and Nancy (Jessica Alba), who’s been driven into an alcoholic mess by the death of John Hartigan (Bruce Willis).  The villains are definitely the most entertaining part of the movie, as Eva Green and Powers Boothe devour scenery with vicious threats and sneers.  Johnny’s story is kind of a complete waste, with terrible movie poker providing most of the action and what feels like a completely unnecessary twist that is ultimately rendered pointless by the end of Johnny’s story.  Of the returning characters, Marv is a highlight again, with his strange moral code and love of violence.  Dwight is basically a completely different character and, despite how good Josh Brolin usually is, he feels like the most generic tough guy, lacking the icy cool that Clive Owen brought to the first movie.  Nancy’s story is kind of bizarre, as she’s haunted by a ghost Bruce Willis and then finally decides after 4 years of boozing and stripping (in the same club Roarke plays poker in every week), to go after Roarke.  All the stories kind of feel the same in A Dame to Kill For and all usually boil down to hero getting almost killed by the villain, rallying and going after them in a final showdown.  It’s been a bit but I feel like the original’s stories had more uniqueness and also flowed better into each other.  Another aspect of the acting that stands out is that a bunch of the actors were under the impression that “noir” means “overact” as there’s some pretty painful performances from guys like Ray Liotta and Christopher Meloni.

A Dame to Kill For also just lacks the punch of the original.  The visuals don’t feel as striking as the original and there’s more cheating with color in this one.  It feels less like the comic come to life and more like a generic action movie that happens to be in black & white.  All the action just feels kind of lifeless as well and there’s nothing that really stands out.  All the energy Robert Rodriguez puts into ridiculous action seems to have gone to the Machete series.

Overall, Sin City: A Dame to Kill For falls into the category of unnecessary sequels.  There are still stories of the various denizens of Sin City in the comics but the first movie hit on the themes and big stories in a cohesive, singular package.  A Dame to Kill For isn’t even more of the same, it’s less in kind of every way.  There’s some brief glimmers of fun from Mickey Rourke, Eva Green and Powers Boothe but overall, I’d say rewatch the first movie or read the comics instead of this one.

Sin City: A Dame to Kill For Trailer