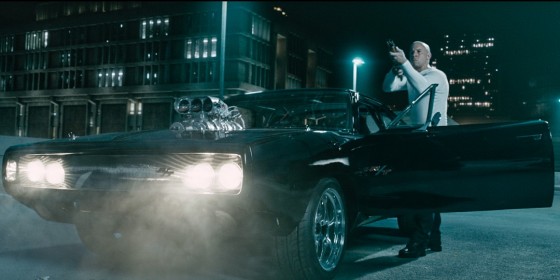 After the tragic death of Paul Walker, Furious 7 was delayed and reworked but the wait was well worth it, as Furious 7 is awesomely insane in all the best ways.

Picking up directly for Furious 6, Deckard Shaw (Jason Statham) targets Dom (Vin Diesel), Brian (Walker) and the rest of the crew, killing Han in Tokyo and blowing up their house in Los Angeles.  After a failed attempt to stop him, Dom is approached by Mr. Nobody (Kurt Russell), a black ops spook who offers Dom a deal, his team rescues a hacker named Ramsey (Nathalie Emmanuel) and in exchange they can use her software called God’s Eye, which is the most sophisticated surveillance software ever, to track Shaw.  What follows is basically a Bond level globe trotting adventure as the crew goes from the mountains of Azerbaijan to Abu Dhabi and finally back home to Los Angeles.  There’s a massive action set piece in each location that are all spectacular and extensive, all three being probably the equivalent of the finales of the previous two entries.  Statham is a fantastic villain and they really play with his character’s reputation of being a “ghost” where he constantly keeps popping up at the worst possible time to mess with the Furious crew and his battles with The Rock and Vin Diesel are potentially the stuff of action legend but his revenge plot is strangely not the focal point.  Instead, Djimon Hounsou and Tony Jaa are the secondary villains who want the God’s Eye and the rescue of Ramsey and then recovering the software takes up 2/3 of the movie.   Jaa does have two excellent fights with Paul Walker though, so there’s that.  The addition of hacker Ramsey doesn’t really add too much to the team that we haven’t already got from Ludacris except the fact she’s gorgeous and it adds some competitive jabbing to the Ludacris/Tyrese banter. Kurt Russell is also a ton of fun and reminds us why we all loved and still love him and his unique mix of bad ass and hilarious  The movie does try to add a little more drama with subplots involving Letty trying to regain her memory and Brian learning he needs to stop taking risks because he has a family now but the former is mysteriously resolved by the end and the latter has been hammered by Dom and other characters since Fast Five and mainly just serve as filler till the next action sequence.

Speaking of the action, director James Wan picks up right where former series director Justin Lin left off and he adds a number of great, stylish flairs like slo mo and rotations for particularly brutal hits and crazy moments.  If you need realism in your action, Furious 7 wants nothing to do with you, as it takes things to an even more ridiculous level, which the series was already pushing to the limit since Fast Five.  Things like skydiving with cars and jumping through the towers of the Bhurj Khalifa are the norm in Furious 7.  The finale is a little more “grounded” as far as the recent entries go but it still involves Statham and Vin Diesel attacking each other with metal poles, drones, The Rock with a minigun and more.  The Furious crew are basically superheroes at this point and has as many call backs, cameos and references as say, the MCU.

Fast Five is probably still the best entry in the series but Furious 7 is an extremely close second, with the fantastic addition of Jason Statham and extended, awesome action that sets the bar extremely high for the rest of the year in action.  If you are a fan of the series, it’s a great move to the future while also looking back at where the series came from.