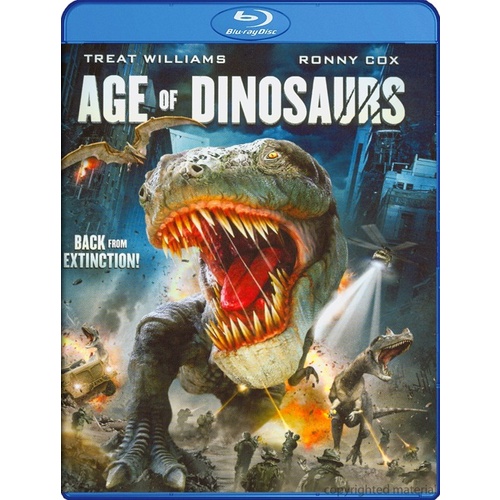 Not really trying to rip off any particular current movie, in 2013, The Asylum mashed up Die Hard and Jurassic Park for what is actually a pretty fun B movie, Age of Dinosaurs.

Treat Williams?  I remember him from…what was that weird 90’s movie?:  You’re probably thinking of Deep Rising, which actually is pretty similar in that it takes the classic Die Hard scenario and throws a winking, B movie spin on it.  In Deep Rising it was a weird undersea leviathan attacking and here, obviously, it’s dinosaurs.  Williams plays Gabe Jacobs, an LA fire fighter currently on “furlough”.  There’s also Jillian Rose Reed, from MTV’s Awkward, as Treat’s daughter Jade and everyone’s favorite 80’s villain Ronny Cox is on board as well, as the well meaning but ultimately incompetent CEO of “Geneti-Sharp”, the company that creates the dinosaurs. 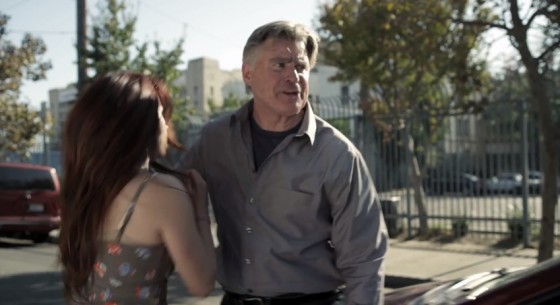 Why are they bringing back dinosaurs anyway?  It’s sort of similar to why Ingen created them in Jurassic Park but in Age of Dinosaurs, the plan is more to make them promotional tools and museum exhibits.  Ronnie Cox imagines a world where dinosaurs are in your local parade, at your son’s birthday party and at museums around the world.  We get a hint in the first scene how terribly unprepared and dumb this company is when we see one of their first attempts to bring back a dinosaur in Japan goes horribly wrong and an entire research team is killed.  That’s where we get kind of our only hint at how Geneti-Sharp is actually bring dinosaurs back, which seems to be transferring brainwaves from komodo dragons to empty dinosaur bodies. 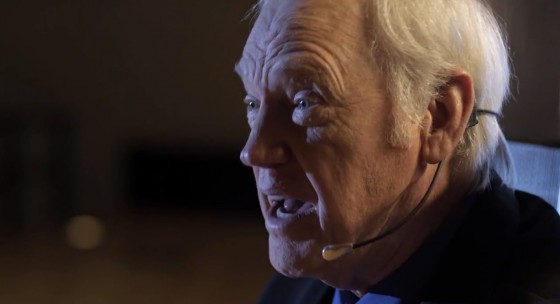 So how do things go wrong in LA?  Well, at Ronny Cox’s big unveiling, the “sonic inhibitors” that they use to control the dinosaurs breaks down and the dinosaurs get loose in the Geneti-sharp building, massacring the assembled VIPs.  Treat aka Gabe Jacobs and Jade are also in attendance because Gabe’s brother in law, Leo, is a security guard at the event and got them tickets.  The first half of the movie kind of proceeds like Die Hard, except replace terrorists with dinosaurs, there’s even a German VIP literally named Hans Gruber.   After killing some dinosaurs and a failed rescue by SWAT, the dinosaurs escape into the streets of LA, where the movie turns into probably the closest thing to a movie adaptation of the old Topps trading card set, Dinosaurs Attack! 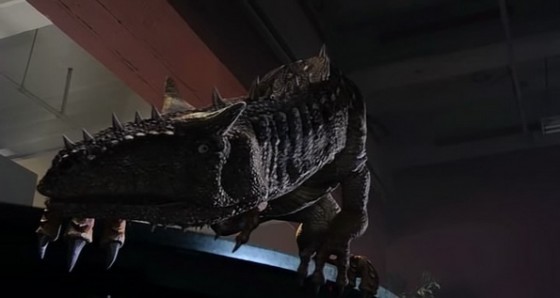 So what kind of dinosaurs are we talking about here?: I actually give The Asylum some credit for not just defaulting to T Rexes and raptors as, instead, we get some Allosaurus and Ceratosaurus, as well as some pesky Pterandons.  Eventually, hundreds of dinosaurs that Geneti-Sharp (a company name that will never not be stupid) have been storing are released into the streets and there are some T Rexes, Spinosaurs and Triceratops in the mix.  The CG is actually pretty OK by Asylum standards, especially the big bad Ceratosaurus. 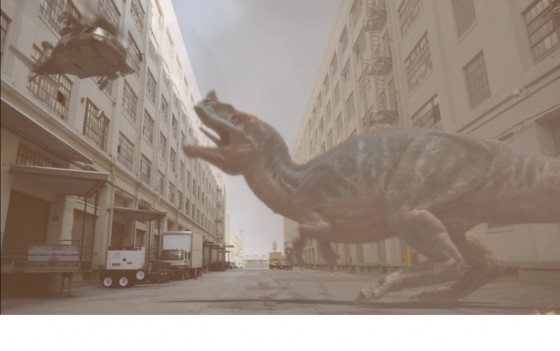 So how do things get resolved?  Well, at least for Gabe and Jade, they escape various encounters with the dinosaurs and make it to an LA mall, where Jade manages to get on the roof and signals Ronny Cox to land with his chopper.  Jade convinces Ronny to help her get her dad and on the way back up the stairs, Ronny says he’s not going to be able to make it because of his bad leg.  It should probably be noted that somehow Ronny Cox used the dinosaur research to give himself back the ability to walk.  Ronny tells Gabe and Jade to go and then he has a final monologue before getting killed by a dinosaur.  Gabe and Jade have to jump to the helicopter but Jade is caught by a Pteranodon, who takes her to the Hollywood sign.  Gabe and the chopper give chase but the chopper crashed into the sign.  Gabe manages to lure the Pterandon into the chopper and get the whole thing to fall down the hill the sign is on.  So Gabe and Jade are safe but, as far as we know, there’s still a massive battle raging between the national guard and dinosaurs. 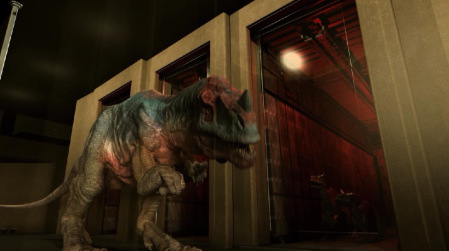 Is it worth watching?  You know, I would say yes, especially if you’re a fan of The Asylum’s crown jewel, Sharknado.  It has the same self aware attitude and ridiculous gore of the Sharknado movies and knows exactly what it’s doing with references to specific scenes in Jurassic Park or the aforementioned German VIP Hans Gruber.  There’s also a little of the John McClane/Al dynamic between Gabe and the local LAPD chief and even an Aliens quote from the chopper pilot for good measure.  If you’ve got some friends and booze, it will probably be a fun time.