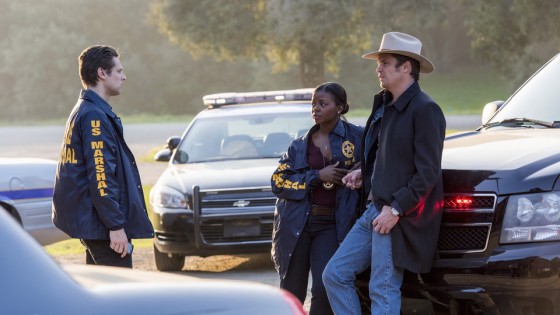 “You’ll Never Leave Harlan” alive is how the song goes; the same song that has permeated throughout the season finales of “Justified”. It’s usually only geared towards Raylan, who despite his law-abiding Marshall status finds the cold-blooded killer vibes of his hometown haunting him at every corner. And there’s a crucial part of this finale that finds Raylan toe-to-toe with his ethics. But we’ll get to that in a minute.

First, we pick up where we left at the end of the previous episode. Ava’s been apprehended by Markham’s dirty cops, while Raylan is brought into custody as Boyd figures out what to do after Zachariah’s explosive death. And even though we are knee-deep in these plots and what Markham and Boon are up, it’s like the show doesn’t really care that it’s a finale.

Speaking of Markham, he’s quick to escalate things with Ava. Even knowing her past as a husband-shooting, Crowder-engaging “wild woman”. But nothing matters to him more than his money, and he’s nonplussed to see Ava with a knapsack only containing half of it. Ava manages to pull a quick one on him though, calling “Zachariah” and tipping off Boyd to her location. Markham and Boyd finally have their shoot-out, one that leaves Markham dead. Of course, by now Raylan has convinced Art to let him tag along in the search and he ends up at the barn post-Markham’s death.

It’s here that the show gets what everyone has been clamoring for over these six long seasons. A true showdown between Boyd and Raylan. Raylan isn’t afraid to kick over a loaded gun to Boyd (considering his is empty, something he found out when he tried to point-blank shoot Ava). Raylan wants to kill Boyd but only on his terms. It’s a deep flashback to the pilot, where Raylan ended up in Kentucky simply because he pulled on old Tommy Bucks. And despite all that he’s learned since then, it seems Raylan wants to keep up to old tricks.

The twist is he ultimately doesn’t. Boyd won’t open fire or give Raylan a chance. Here, old Raylan wouldn’t hesitate to cheat or find a way to tip the scales in his ethical favor. But when Boyd calls his bluff, Raylan finally concedes that calling the feds is the right thing to do no matter how he wants it to go down.

Only one loose end is out there: Boon, who ran off with Loretta. And as Raylan escorts Ava to be arraigned, he finds himself in another showdown with the Raylan wannabe. They both pull; Boon mortally wounded, but Raylan saved by his hat. (This is a great callback to the pilot where Boyd made an off-the-cuff remark about Raylan wearing is hat so high. It must’ve thrown off Boon’s aim.) Raylan may have survived, but unfortunately in this whole process, Ava gets away.

With Boyd in cuffs and congrats all around, it’s finally time for Raylan to head to Miami to be with Winona and Willa. Art mentions that it took a lot longer, but he got what he wanted out of Raylan: Boyd Crowder.

The final act of the finale finds up four years later. Raylan is happily located and working for the marshalls in Florida, spending time with Willa and a now-taken Winona. He seems to finally be at peace. That is until a hot tip from Rachel comes in the mail: it seems Ava was spotted in the background of a newspaper photo in rural California. Raylan tracks her down, threatening to haul her in. She pleads though, still fearing for her safety and looking over her shoulder constantly for Boyd who may escape. Raylan has a change of hear though when she reveals to him her and Boyd’s son, Zachariah. Raylan follows through with his promise all along to protect her.

Which brings us to our last scene. Boyd, happily encarcerated and preaching the gospel to new crowd of goons, is surprised by a visit from Raylan. Raylan provides him fake documents “proving” Ava’s death on the lam, which he accepts as truth. But Boyd is confused by one last thing: why did Raylan deliver the news in person? Raylan answered he thought the news needed a personal touch. But he gives in to his sentimentality. It was because the dug coal together.

The long asked question has been answered. They all left Harlan alive. But the town sucked a lot of things out of them. And while Boyd and Raylan were begging for a bullet in their own ways all along, they stayed alive. Boyd and Raylan had their differences on each end of the morality spectrum. Maybe that’s why they ultimately could not kill each other. The bond of Harlan kept them alive. They dug coal together.