The Great Philadelphia Comic-con had a wide variety of special guests, a good mix of regional talent and others from the West coast;  some of whom I’ve rarely seen in the East coast conventions.

For many of the conventions I have been to, I never saw more than two Power Rangers in the same place. This con had some of the original rangers, and voice actors. It was about to get my morphing time on!

Sitting only a few feet in front of me was my Saturday morning. I’ve of watched these people karate chop, flip and scream in a fake California that ended in a super robot & monster fight almost every episode (And the ones they don’t morph aren’t worth remembering).

I joined a crowded room with other fans to listen to the actors talk about their experience working on Mighty Morphing Power Rangers and the silliness of how certain characters acted or were written out of the series. From Walter Jones’s character Zack attending a “peace conference” and never coming back, Karan Ashley’s character trading places with a random girl in Africa, and David Yost’s character Billy possibly having tab pole babies on that water planet when he left Earth.

The Power Rangers fans from the area all came out to ask questions and geek out with the cast, I joined the many people wearing power ranger apparel while at the convention, but not of us reached the level of this fan: The Rita Repulsa 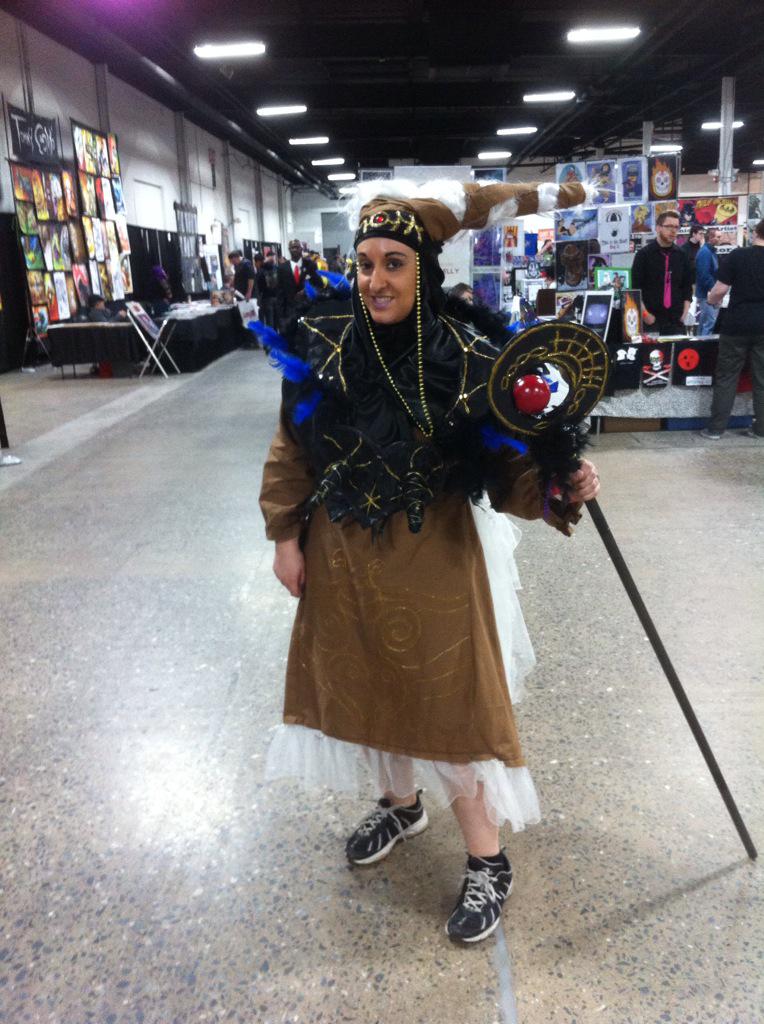 A few oddities caught my attention in a bizarre way. First off, the convention had a special kids-only area where parents can drop off their small kids to run away and doddle on paper or play with Easter eggs.

During the first two days, this area housed little kids and they burned off excess energy while their parents rested. It’s a nice addition to the convention and gives the kids something to do in between panel changes. However, at Day 3 of the con, this place becomes a Battle Arena.

On Easter Sunday, some guy dressed up as a Bunny and hung around the Kids Corner to play fight with the kids. It was already kind of warm inside the convention center with the spring weather, but it must have been boiling inside that suit. He gave a nice play routine for a few minutes before he had to make a quick escape to breathe outside, but he really made this event cool for those kids and myself as well.

The Second oddity was the Bath Fitter & Kitchen Saver booth that had nothing to do with the geek culture but actually had some entertaining salesmen.

These guys knew very little about sci-fi or comic books, but were excited for anyone to stop by and ask questions about remodeling. We traded stories about previous conventions and had a few laughs before I was off to roam to the next panels.

I caught a screening of the works from guys who made Nightwing: Escalation where they showed off their latest projects.

The Season 3 trailer of NightWing

The pilot of Losers:

“Two friends (Zack and Manny) go to an engagement party of a friend (Roy) that they have not seen in a while. When they meet they are shocked to find that he has shrugged off all geekiness and nerdom. He has to hide his love for sci-fi, fantasy, video games, and comics from his fiancé (Emily). This all culminates to a lightsaber fight where reality is shattered and true nature is revealed.”

On the second day of the convention, George Takei made an appearance and gave a panel about his experience as an actor and an activist. Takei’s gave a great speech about his time acting in Star Trek and the legacy that his work left on people. However, he mentions how the most difficult challenge working with Star Trek came from within.

If you haven’t by now, I highly recommend attending a George Takei event to anyone who enjoyed the original Star Trek or follows his social media movements. He gives inspiring speeches and a sense of comfort in pursuing the dreams that make you happy.

Speaking of Star Trek, here are two fans that gave some love to the old school stuff:

Floating in the air at the convention was the delicious smell of fried fats and sugar, there was a funnel cake booth that filled the air with the aroma of fried goodness. I held out for the first two days, but on day 3 my will broke.

During my time, I clicked a few shots of the cosplay community walking around. There was a cosplay contest that I couldn’t attend, but from what I saw already it looked like a lot of people made great efforts on their costumes.

It was great to visit another convention in the expanding convention scene in the tri-state area. I got to kick off the spring season with some of my favorite actors that influenced my past. I yelled love and praise to a few power rangers and smiled at Jonathan Frakes with a mouth full of funnel cake.

I hope I made a good impression.