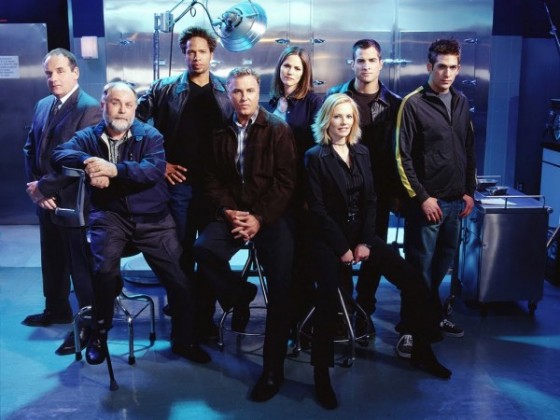 The OG CSI is ending this coming season on CBS with a finale movie to wrap up the adventures of the Las Vegas Crime Scene Investigation team, so it seems like a good time to go back and see where it all began with the first episode.

Did I Know Anything Going In?: I was super into the first few seasons of CSI, so I definitely knew our original team of Grissom (William Petersen), Catherine (Marg Helgenberger), Nick (George Eads), Warrick (Gary Dourdan) and Brass (Paul Guilfoyle).  I also vaguely remembered what happened to rookie CSI, Holly Gribbs (Chandra West) although the specifics of exactly what happens in the first episode were lost in the last 15 years.

So, right off the bat, I was surprised by a lot of things in the CSI pilot.  First of all, the sheer whirlwind of cases the team investigates is something I did not expect.  As the show went on, there was usually an A case and a B case but everyone basically scatters to take on 2 or 3 cases each.  I was also surprised that there wasn’t a lot of “Forensics 101” going on in the first episode.  Normally, when you introduce a rookie character like Holly, you use her as a device to explain to her, and extension the audience, what is happening but most of the forensics tech and science you just have to pick up through their use by the team.  I was surprised by how little insect talk there was from Grissom (although that’s literally the first piece of evidence we see get collected in the show) and the times when there is explanations, it’s smartly done.  There’s also a lightness to most of the characters, even Grissom, that is a little strange to go back to after watching future episodes.  Nick and Warrick are competing to see who can get 100 cases first, Catherine is rescuing Holly from a crazed liquor store clerk and then giving her a pep talk about how awesome it is to be a CSI and Grissom went on an honest to god date with one of the lab techs, who is a country girl that Grissom unwisely brought to a Pink Floyd/Wizard of Oz show.  It’s definitely a deliberate move to lull the audience into a false sense of fun and security before dropping the bomb in the final moments of the episode. On the opposite end of the “fun” spectrum, Jim Brass is a huge asshole in the pilot, ripping into Holly almost immediately and refusing to back Warrick’s toenail evidence, deeming it to flimsy. The side characters at the lab are also not fully formed in this episode, with the exception of Greg (Eric Szmanda), who’s his usual mix of smarmy and nerdy.  Coroner Al Robbins is not yet part of the lab and Sarah Sidle (Jorja Fox), one of the main team members, does not show up until the second episode, when she’s called in from out of town by Grissom to help with the Holly investigation.

As for the plot, there are two main cases in the episode along with a ton of side cases that are mainly there to show how crazy the night shift in Las Vegas is for the team.  Grissom is investigating an apparent suicide that it turns out from the size of the entry wound and the voice on the recording left by the victim, is a homicide.  I was incredibly impressed that, in the pilot, they introduce Paul Millander, who would become Grissom’s nemesis when they discover he’s a transexual serial killer but here, he’s cast off as a red herring when Grissom finds his fingerprints on the tape recorder but then learns that Paul works in a latex prop shop and his hand is the model for their severed hand prop, fingerprints included.  The case isn’t solved but it’s actually pretty impressive that they laid the seeds for one of the show’s recurring villains in the first episode.  The other major case is investigated by Catherine and Warrick as they respond to a shooting in a home where the father of the family says the victim is a friend who was living with the family until they recently kicked him out.  He returned in a rage and kicked down the door, forcing the father to shoot him.  Going off a mistied show, Warrick finds a toenail that most likely belongs to the father but he’s overzealous in trying to get a warrant and Brass kicks him off the case. He’s left to babysit Holly and Grissom picks things up, matches a toenail from the home’s bathroom to the father’s toenail and he’s arrested for murder.  Nick, meanwhile, gets called in to investigate a “trick roll”, where an older visitor from out of town was conned by a hooker and robbed.  Later that night, a woman (guest star Krista Allen) drives into a lightpole on the strip after she claims she passed out and Nick makes her as the con artist, who put scopoalmine on her nipples to roofie her victims but it absorbed into her skin and knocked her out as well.  Nick gets his 100th case and is promoted to CSI Level 3 but the celebration is cut short when Brass announces that Holly, left at a robbery scene by Warrick, has been shot and will most likely not make it.

I can definitely see why CSI became such a phenomenon from it’s first episode.  It’s focus on the science of crimes made it a breathe of fresh air among the other crime shows at the time and it just had a cool vibe with it’s Who title song, the extreme evidence zoom ins and the setting of Las Vegas.  It’s been copied and spun off to death in the last 15 years but those first few seasons of CSI are still some great episodes of TV.