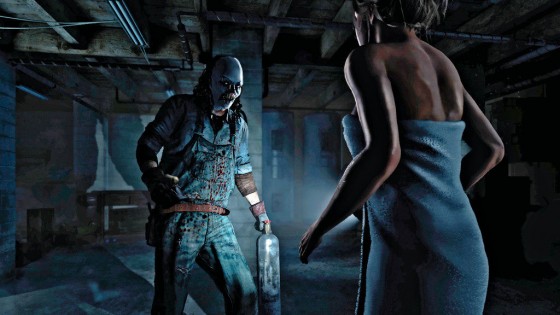 The avalanche of both huge triple A and smaller indie games for the fall is starting and we’ve gotten the chance to play a bunch since the last edition of Gamebox 2.0 (Full disclosure: I have not played any MGS game so you won’t hear my thoughts on MGS V)

Until Dawn: If you are a horror movie fan and have a PS4, you owe it to yourself to check out Until Dawn, which lets you finally decide who lives, who dies and what happens in an old school slasher story.  A group of friends head up to a secluded ski resort a year after a terrible tragedy and they start being stalked by a mysterious psycho.  Peter Stormare, Hayden Panettiere, Brett Dalton and Rami Malek all lend their voices and appearance to the game and it feels like there’s tons of branches to the story.  I made it out with four of the friends alive but you can get a game with all of them alive, only 1 and much more depending on what clues and events you trigger earlier in the game.

12 is Better than 6: Currently on Kickstarter, 12 is Better Than 6 is a top down shooter set in 1873 and featuring an extremely unique sort of notebook drawing art style.  There is a pre-alpha demo version available to download and if you’re a fan of Hotline Miami, you’ll probably really dig 12 is Better Than 6, it features that same style of hardcore precision, where one wrong move will probably lead to you restarting the level.  If that wasn’t hard enough, you also will have to cock your gun before each shot, so you need to have some excellent mouse dexterity.  There are 19 days left on the Kickstarter, you check out the video and the demo and then help out if you can.

Party Hard: I got to play it way back at PAX East earlier this year before it was even officially released but Party Hard has been officially out for about a month now and it’s an excellent, insane game.  You play as a psycho who snaps after his neighbors have a loud party and kills them all and then travels across the country slaughtering bigger and bigger parties.  Each party you get to is extremely unique and it’s a puzzle to try and figure out the best way to take out guests.  There are a few environmental traps you can trigger and usually a one time use item but you mostly have to pay attention to the guests and jump on opportunities to isolate someone and take them out without anyone seeing.  If you Twitch stream at all, Party Hard also has the incredibly unique feature of letting your Twitch audience vote on random events that can happen in the game while they are watching.

Assault Android Cactus: Although it features cutesy robot girls, Assault Android Cactus is an excellent throwback to arcade shooters like Robotron or Smash TV as you fight against the rogue AI of a space cruiser.  Each android girl you choose has a unique weapon and special move and you use twin analog sticks to move and shoot.  It sets it apart from those older games by featuring constantly shifting arenas, with walls and pits opening randomly to disrupt your flow and the mechanic that your girl needs batteries to stay fighting, so you have to collect batteries dropped by your enemies to recharge and, if you run out of battery, it’s game over.  That latter mechanic also changes up getting “killed” because if you are killed, you lose battery instead of a life.  There’s some awesome boss fights and tons of unlockable characters, so if you are fan of arcade shooters, definitely check it out.

Edge of Space: It’s been in early access on Steam for a while now but Edge of Space was recently officially released with version 1.0.  You play as a space explorer who crash lands on a strange planet and must collect various resources and build different gadgets and weapons to escape.  It’s very much in the vein of Minecraft and, I have to admit, it’s not really my cup of tea but if you are a fan of that type of game, there seems to just be an overwhelming amount of things you can collect and craft and each planet is randomly generated and you can also play with friends as well.

Albino Lullaby: Probably the weirdest game I played since the last edition of Gamebox 2.0, Episode 1 of Albino Lullaby is a first person horror game where your character has ended up in a strange, Tim Burtonesque limbo where a creepy “family” of armless, legless creatures live and there seems to be some sort of disturbing experiments or cult activity going on.  You travel through a constantly shifting hospital/mansion/insane asylum and solve puzzles and collect increasingly disturbing notes scattered around the world.  There will be three episodes of the game released and it’s probably not for everyone but if you like the art style and horror games, it might be worth checking out.

Star Wars: Uprising: Announced as one of the first games in the new, official Star Wars canon, Star Wars: Uprising was released about a week or two ago for iOS and Android.  Taking place a short time after Return of the Jedi, you create a smuggler/scoundrel who is trying to make a living in a star system blockaded by the Iron Blockade, an Imperial fleet that has completely cut off the system, so much so that most of the residents don’t even know Palpatine is dead.  You complete short, Diablo style top down missions for various nefarious characters and travel to different planets around the system.  You can build your rep with different factions depending on what missions you take and you earn loot like in a Diablo style RPG.  It’s not going to revolutionize the RPG genre but it’s free and if you are a Star Wars fan, it’s a fun way to kill some time on the bus or on a trip.

Ty the Tasmanian Tiger 4: Back in the PS2, Xbox days, there was a trilogy of platformers featuring Ty the Tasmanian Tiger and now Ty is back on Steam with the fourth entry in the series in ten years.  Looking and playing like the recent Rayman games, Ty 4 is a 2D side scroller where Ty navigates through levels and has to complete a specific objective, like lighting barrels for a friend to navigate his way home in the dark, but there are tons of side missions and collectibles to find in each level.  Ty is armed with dual boomerangs and there’s a bunch of unlockable “Rangs” to buy with gems collected in the levels and it seems like you may need to head back into previous levels with more powerful Rangs to get all the collectibles.  It doesn’t feel quite as smooth as the Rayman games but it’s an extremely solid and fun platformer, even if you don’t remember Ty.