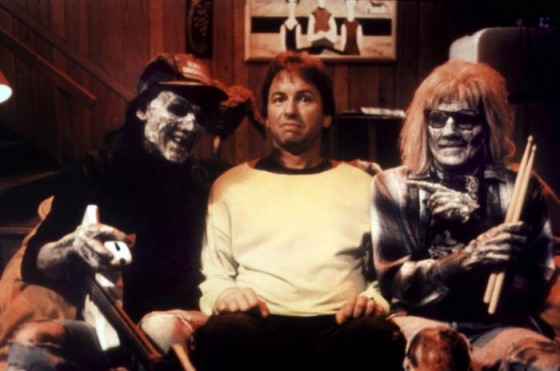 An underrated gem from 1992 is Stay Tuned, starring John Ritter, Pam Dawber and Jeffrey Jones.  Ritter stars as Roy, a TV addicted husband who is approached by a shady salesman (Jones) to test out a powerful new satellite system but it’s actually a trap by Hell to send humans through a gauntlet of horrific TV show parodies to entertain the big boss himself.  The key to survival is Ritter’s remote, which lets him switch channels and rescue his wife from the clutches of evil executive Spike before his wife’s soul is lost forever.  After fighting through a warped gameshow, a Chuck Jones cartoon and a Casablancaesque movie, Roy ends up in a Salt-N-Pepa video for HTV (Hell TV) where he has to recover his remote as it’s knocked around the set by various back up dancers and before Spike can stop him.  Check out the whole sequence below (and check out the entire movie if you’ve never seen it, because it’s great).