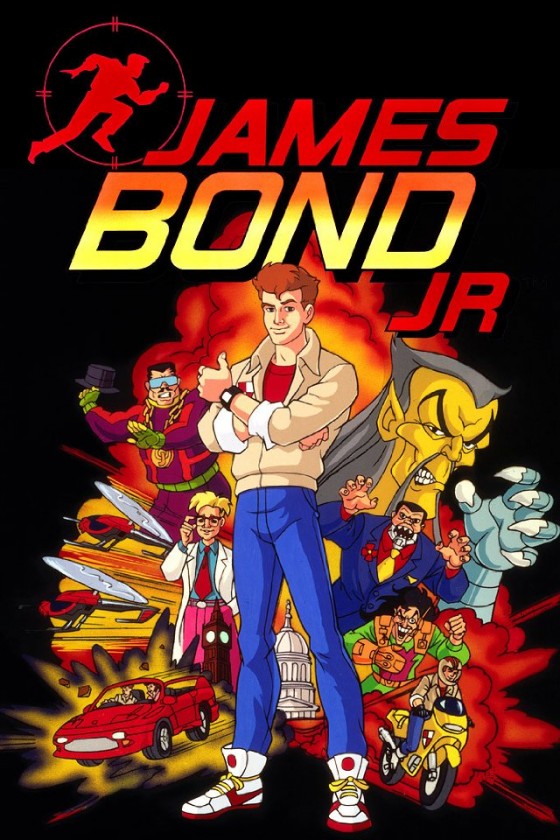 Spectre is arriving in theaters this Friday and it’s the 24th entry in the series.  There has definitely been some ups and downs, non-official movies because of licensing and such but one of the strangest things to come out of the Bond series is 1991’s James Bond Jr cartoon series.

Did I Know Anything Going In?:  Being a huge Bond fan, I had heard of this cartoon but I didn’t watch any of it growing up and this is actually the first full episode I’ve ever watched.

First of all, I have to point out that James Bond Jr. is not actually 007’s son (although that would make much more sense considering all of his various rendezvous).  Junior is actually Bond’s nephew and is on his way to attend the prestigious Warfield Academy.  The first episode kicks off with Junior somehow having been given the keys to his uncle’s Aston Martin DB5 and is under attack by SCUM, the kid friendly equivalent of SPECTRE led by the mysterious, in no way referencing Dr. Claw, Scumlord (They are completely different, Dr. Claw had a cat, Scumlord has a dog).  Junior manages to escape with the DB5’s flight mode and makes it school just in time to piss off Mr. Milbanks, the headmaster, and is instantly confined to the school grounds.

Attending school along with Junior are IQ, Q’s grandson who is not quite as accomplished at making gadgets, Gordo Leiter, the son of CIA agent Felix Leiter (and a ridiculously stereotypical 90’s “surfer dude”) and Tracy Milbanks and Phoebe Farragut, who kind of split Moneypenny’s personality traits between them.  There’s also the requisite school snob, Trevor Noseworthy IV, who is constantly trying to get Junior in trouble and then always ending up in some sort of embarrassing situation.

Once settled in and instantly friends with all his new classmates, the main plot of the first episode finds Junior sneaking into town with Tracy and IQ because he gets word that he has gotten a package from his uncle but instead it’s a SCUM trap and Jaws steals the DB5 with Tracy hiding in the backseat.  Junior gets Gordo to give him a ride in his surfer van and manages to catch up to Jaws and Scumlord as they are loading the DB5 into a plane.  Junior sneaks onboard and uses a remote control for the DB5 and a laser firing watch borrowed from IQ to rescue Tracy and escape the plane before it crashes.  Junior makes it back to school just in time to make Trevo look like a whiny liar and is rewarded after blowing up possibly millions of dollars of spy gadgetry with his own Aston Martin convertible from his uncle.

The fact that it was even moderately popular is surprising because this show is fucking terrible.  I appreciate the little Bond touches with the DB5 and the classic villains but basically everything else is really bad.  The voice acting is jarringly terrible with some of the worst fake British accents I’ve ever heard, the animation is really choppy, even for 1991 and the fact that there’s coincidentally all these Bond character offspring at the same school just gives me PTSD to Gotham and it’s jamming of villains into the show with no regard for if it will make sense later in the theoretical future of the universe.  This was also an officially endorsed product by United Artists, who had the Bond license at the time.  As a curiosity for Bond fans, it might be worth watching the first episode just to say you’ve seen an episode of James Bond Jr but don’t be surprised if you start to wish for something like 007 surfing on a glacier to happen instead.