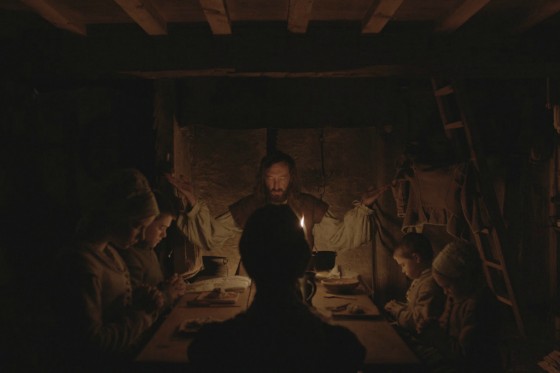 Setting up almost from the start an overwhelming sense of dread and featuring an obsessive level of attention to detail, The Witch is a slow burn of horror that might be a little too dense for the casual fan.

Set in the 1630s, about 60 years before the infamous Salem Witch Trials, a family led by patriarch William (Ralph Ineson) leaves their Puritan plantation and sets out to settle their own farm on the edges of some ominous woods.  Starting with the disappearance of their infant son, a steadily increasing series of tragedies start to occur to the family and eventually the idea of witchcraft is brought up.  If you’re looking for big set piece sequences or tons of jump scares, you’ll probably be disappointed by The Witch, although it does have possibly the creepiest goat in horror history with Black Phillip.  It’s much more concerned with setting a mood and that mood is the family’s nerves and faith slowly shattering and the sense that things are never going to get better.  The brief glimpses of the titular witch are incredibly disturbing and this is one of those horror movies where you see a bit and imagine even worse things. The only nitpick about the story is that after the slow burn of almost the entire film, the climax ramps up in a slightly jarring manner and it feels a bit rushed, although the final scene is excellent.

The cast are all universally great and absolutely vanish into their roles.  Ralph Ineson and Kate Dickie, who plays the mother Catherine, are both Game of Thrones vets and know how to sell the 1630s way of speaking and you can see how hard this life has been on their faces.  Relative newcomer Anya Taylor-Joy is excellent as oldest daughter Thomasin, who draws the most suspicion to possibly being a witch as most of the horrible events seem to occur around her.  We’re going to probably seeing much more from her soon, just like how last year’s indie horror heroine Maika Monroe of It Follows is now going to be co-starring Independence Day: Resurgence this summer.

It’s not as flashy or full of jump scares as some other recent horror movies but if are in the mood for a more atmospheric, slow burn of a horror movie, The Witch is definitely one to check out.  It’s probably not for everyone, as the way the characters talk and the pace of the plot will be too much for some horror fans but it’s a great feature debut for director Robert Eggers and it definitely makes me much more excited for his Nosferatu reboot.