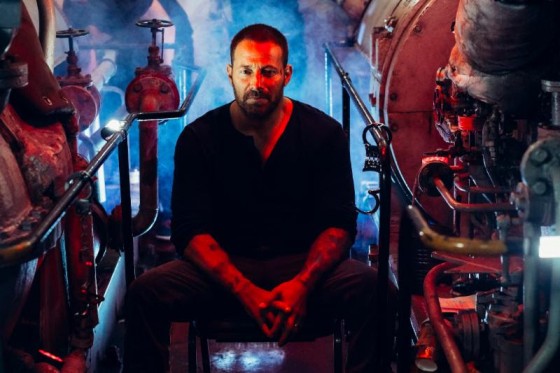 Despite the presence of two potentially scenery devouring co-stars, a giant robot and nanobots, Weaponized is a pretty standard thriller that recently came out on DVD and Blu-Ray.

Johnny Messner stars as LAPD detective Mitch Walker in the far off future of 2018  In 2017, there was another 9/11 level attack on the Pentagon that pushed the war in the Middle East to escalate even more and the US also looks to private weapons companies like Black Sun, led by CEO Kyle Norris (Tom Sizemore), for a new way to fight terrorists.  When a Army vet goes on a shooting spree in a high end hotel, Detective Walker stumbles across a conspiracy that Norris may be using a new tech called “swapping”, where a person can temporarily take control of another person’s actions, that he’s developing for the military for his own means.  Mickey Rourke plays one of the co-creators of swapping, Clarence Peterson.  Weaponized plays out basically like an extended episode of any of the many procedurals on TV, probably something Karl Urban would be investigating if Almost Human hadn’t gotten cancelld; There’s the opening crime and then the detectives working the clues and leads to eventually track down the real culprit with all the cliches you would expect like the angry police chief (played by Streets of Fire’s Michael Pare), the detective getting thrown off the case and eventually having to go rogue to unravel the mystery.  The problem is that we all know Tom Sizemore is clearly the villain, so it’s a lot of wheel turning to get to a solution we’ve known for the last hour and a half.  The main conceit of “swapping” also never gets any sort of solid rules or explanation and it seems to work differently each time, so you never get a sense of how or why things are happening or why you should care.  There are a few clever uses of the tech, like when Tom Sizemore seemingly injects Walker’s wife with the swapping nanobots to capture him or Sizemore giving a demonstration where a terrorist leader who was injected nanobots while being interrogated gets taken over and used to kill his fellow leaders.  None of the swapping has to do with the robot featured prominently on the DVD cover and in the trailer, it’s basically an afterthought that is introduced in the last 2o minutes and is involved in one pathetic fight with Walker and his partner and it could have been completely removed from the movie without changing anything in regards to the plot.

There are a couple bright spots in Weaponized including one good saliva spewing monologue from Sizemore when he has Walker seemingly captured and injected with nanobots to be controlled and John Foo, CBS’ replacement for Jackie Chan in the Rush Hour series, plays a hacker who gets into Black Sun’s systems and he has an extended sequence where he gets to show off his martial arts skills.  Johnny Messner, who’s been in movies like Anacondas, Tears of the Sun and Running Scared, is pretty generic, I got a lot of the same vibes I get from Sullivan Stapleton on Blindspot where his default face and tone is “grimace”.

Overall, Weaponized is probably going to be one of those movies in see in Redbox or on Netflix Instant on a lazy Saturday and might check out based on the presence of Sizemore and Rourke but it’s pretty generic in almost every way.  It never goes as crazy as the premise seems like it would lend itself to and Rourke and Sizemore don’t really get the chance to chew scenery like we’ve seen them do in other movies.

Tom Sizemore is Unleashing A “Robotic Virus” in Weaponized (Trailer)