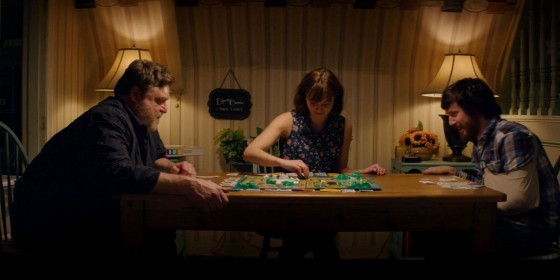 Dropping into the public consciousness completely out of nowhere in January, the “spiritual successor” to Cloverfield is here and if you are expecting more kaiju filled chaos, you may be disappointed, however, if you are looking for an excellent, tense thriller, 10 Cloverfield Lane delivers.

Starring the trio of John Goodman, Mary Elizabeth Winstead and John Gallagher Jr, with Winstead’s Michelle getting into a terrible car crash and waking up in the underground shelter of Howard (Goodman), who claims the outside world has been attacked and everyone is most likely dead.  Gallagher Jr plays Emmett, who helped Howard build the shelter and then fights his way inside when things started to go down.  The movie does a fantastic job of keeping a tense, claustrophobic feel and it also doles out clues and reveals at a satisfying and smart pace and the tone is also helped by an excellent Bear McCreary score.  You’ll be sure Howard is a lying creep but then something will happen to make you think maybe he’s telling the truth and you’ll be kept guessing until the finale.  Speaking of the finale though, without spoiling anything, the final sequence is a little jarring and completely unlike the paranoid slow burn of the previous 90 minutes.  It’s not that nothing cool happens but the movie goes from 0 to 100 within the span of a few minutes and I feel like I would have preferred it to end on a slightly more ambiguous, ominous ending like the Twilight Zone episodes the movie is inspired by.

Acting wise, everyone is excellent, especially Goodman who fluctuates between full on rage to kind of sad and pathetic at the drop of a hat and he makes an amazing, unhinged antagonist that you are never sure what is going to set him off or what he’s going to do next.  Winstead easily goes toe to toe with him, playing a great, kick ass heroine who pretty much from the first second she’s in the shelter is constantly trying to plan a way out and is not afraid to fight her way out if she has to.  Gallagher Jr is great as well but the main show is Michelle vs Howard.  The bunker itself is almost a character as well and it’s almost 70’s style hominess contrasts the terrible things happening inside and outside in a wonderful way.

If you are going in expecting Cloverfield 2, with more giant monsters and found footage chaos, this is not that at all but if you are in the mood for an excellently acted and incredibly tense thriller, 10 Cloverfield Lane delivers.