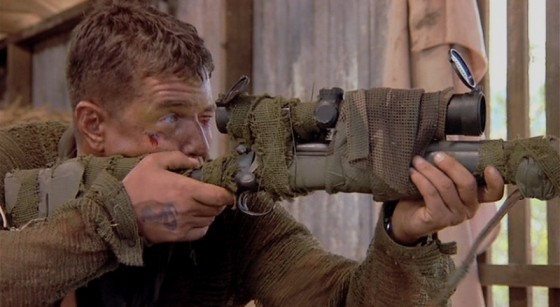 I don’t know about most of you but we didn’t get cable for a while when I was a kid so, after Saturday morning cartoons, you had to roll the dice and see what your local affiliates had for the rest of the day.  My UPN channel (remember when that was a thing?) had the Hercules/Xena combo and some other syndicated shows but there was usually a chunk of time from like 2 in the afternoon to around 5 or 6 that usually had to get filled with a movie.  This is where I discovered the underrated John Ritter classic Stay Tuned, for example:

But the movie that seemed to be on every other Saturday was Sniper, starring Tom Berenger and Billy Zane:

Sniper, I think, is the perfect weekend afternoon movie for a number of reasons.  First of all, the plot is super straightforward, Berenger and Zane have to go in and take out rebel general in Panama.  It’s simple enough that if you were channel surfing and stopped to watch for a bit, you could figure out the basic gist of what was going on.  It’s also not trying to be anything more than a stupid action movie, which is perfect for a lazy Saturday watching TV.  You don’t really want deep political messages or hidden meanings, you just want to watch Tom Berenger in a ghillie suit or Billy Zane have a crazed freak out.

Second, it doesn’t lose a lot when edited for TV.  The theatrical version is a little more violent and maybe has some slightly saltier language, but for the most part, Sniper arrives to your TV pretty much intact.  It’s not like when you take a movie like say, Robocop or Die Hard, and make it safe for TV.

Third, it has enough hooks to draw you in.  There’s so much crosshair and sniper scope vision in Sniper that there’s a good chance you’ll see that while surfing and have to stop and see what it is.  It also has “bullet cam” whenever Zane or Berenger take a shot, which basically ever sniper video game has taken since then:

If you have never seen Sniper, check it out and imagine it’s playing in the late afternoon on your local Fox or CW station.  Was there a movie that you think is the perfect Saturday afternoon movie? Let us know.

Look Down the Scope for Sniper: Ghost Shooter (Trailer)