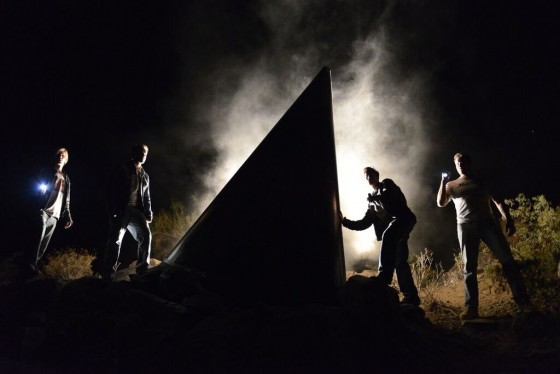 One of the most infamous UFO incidents of all time gets a found footage/faux documentary spin in The Phoenix Incident.

In 1997, hundreds of residents in the Phoenix area saw a string of mysterious lights travel across the night sky in a v formation that seemed to be some sort of craft that made no sound.  The Air Force’s explanation was that it was a group of military flares released by an A-10 Warthog.  The Phoenix Incident adds in a missing persons case, a possible serial killer and a massive cover up to the event as four friends (played by Troy Baker, Yuri Lowenthal, Travis Willingham and Liam O’Brien) are on an ATV trip in the desert when they start seeing increased military activity, then the mysterious lights and then things get really strange when what they think is a new type of Air Force plane crashes nearby.  Right from the start, you know the four men are missing and presumed dead and the movie flips back and forth between the documentary crew investigating their disappearance and the government conspiracy around the “Phoenix Incident” and found footage from the cameras the guys bring on their trip.  Both sides are well done, with the found footage side particularly being a huge step above almost any other recent found footage movie, like say Oren Peli’s Area 51.  It probably helps that the four main protagonists are all some of the best voice actors in the industry and their acting skills come through when they are in front of the camera as well.  Most found footage protagonists are completely hateable a la, the yuppies from Cloverfield, but all four of the main guys are interesting and fleshed out and you actually care when horrible things starts to happen.  I really enjoyed the documentary side of things as well, there’s some great stuff with an Air Force officer who is coming forward to tell what really happened and a creepy interview with Walton Gayson (Michael Adamthwaite), who was convicted for the murder of the four men and has bizarre beliefs about aliens, which you see in some unnerving footage found in his compound in the desert.

The one thing that I know I hate about a lot of found footage movies is that they tease a monster or ghost or what have you for the entire movie and then give you just the tiniest sliver of a glimpse at the end but The Phoenix Incident does not do that at all.  The last 30 minutes or so is almost non-stop action and the special effects for what is happening are excellent and it doesn’t shy away or try to fake you out, you get to see pretty much everything that is happening to the four protagonists.  If you want to dive even deeper into the conspiracy, there’s also a massive ARG to dive into afterwards, with multiple websites and fake social media accounts  (try the missing persons website during the end credits to start your hunt).

If you are fan of found footage and UFO/conspiracy fiction, The Phoenix Incident is one of the best examples of both I’ve seen in a while.  The acting is great from pretty much everyone and you never feel cheated when the crazy stuff starts to happen like most other found footage movies.  It’s out in theaters and on VOD tomorrow (4/8/2016) and it’s definitely worth checking out.