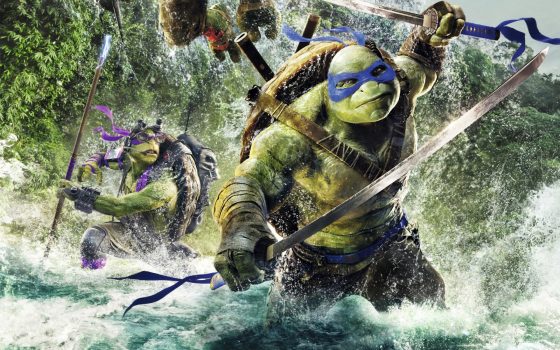 The 2014 reboot of the Ninja Turtles, while not as catastrophically bad as we feared, still had a lot of strange issues and was trying to hard to ape producer Michael Bay’s Transformers series.  Out of the Shadows course corrects in pretty much every way and is a blast for new and old TMNT fans alike

Picking up a year after the first film, the Turtles are fighting crime from the shadows (and doing things like sneaking into MSG for Knicks games) and Shredder (Brian Tee) is about to be transferred to a maximum security prison upstate.  He’s been working with evil scientist Baxter Stockman (Tyler Perry) and escapes from the convoy transporting him using teleportation technology.  He’s temporarily transported to Dimension X where he’s confronted by Krang (Brad Garrett), who tasks Shredder to find two other pieces of alien tech to create a portal big enough to allow Krang to bring his warship the Technodrome through to Earth and conquer it.  To help stop the Turtles from interferring, Stockman and Shredder use an alien mutagen provided by Krang to transform bumbling street toughs Bebop (Gary Anthony Williams) and Rocksteady (Sheamus) into hulking beasts and the race is on to get the pieces.  The plot is pretty straight forward but it definitely feels more like something in the spirit of the cartoons as opposed to the convoluted logic, or lack thereof, in the first film.  Actually, everything feels more like the cartoons and the movie fully embraces the goofy side of the TMNT, even including a new version of the theme song over the end credits instead of a generic hip-hop song.  There’s huge, well executed action sequences, including a battle on board an airplane in the skies of Brazil that leads to a white water rapids chase to get a piece of alien tech and the impractical but fun new Turtle Van, that has giant nunchuks and a manhole shooter.

The Turtles themselves feel more like their cartoon counterparts, with Donatello providing tons of exposition and technobabble, Raph and Leo butting heads over how the team should proceed and Michelangelo being more party dude and less creepy stalker of April (he still has a crush on her but it’s massively toned down from the first movie).  Krang is exactly how he was on the original cartoon and he’s used to bookend the movie.  There’s just enough of him that leaves you wanting more but he doesn’t overstay his welcome either.  Actually having someone play Shredder also makes a big difference instead of making him a CG knife shooting Transformer.  Brian Tee does a solid job playing the deadly serious Oroku Saki but does get to drop a few 80’s style “TURTLES!” or “O’NEAL!!!” exclamations every once in a while.  I got what Tyler Perry was trying to do as Stockman but his bizarre mad scientist shtick didn’t work for me at all and he was more annoying than humorous.  The big standouts for me, and the sources of the biggest laughs, are Will Arnett back as Vern who, in a ridiculous running joke, has been credited with single handedly defeating Shredder in the first film to protect the identities of the Turtles, and he’s fully in egomaniacal GOB Bluth territory and has some excellent one liners and asides.  The second standout is Gary Anthony Williams as Bebop, who just seems to be having a blast and brings so much energy and fun to the role.  Bebop and Rocksteady’s BFF bromance is one of the best parts of the movie and it’s so great to see those two finally realized on the big screen.  Stephen Amell is fine as Casey Jones, although he’s playing a slightly more happy version of Oliver Queen.  He gets two action sequences to show off his sports based vigilante style, one featuring his iconic helmet and hockey stick combo and they give him a slightly different origin to tie him more into Shredder, Bebop and Rocksteady, as he’s a corrections officer who is on the convoy when Shredder escapes and which also happens to be transporting the dim witted duo.  Megan Fox is back as April and while she doesn’t dominate the movie like in the first movie, she’s still given basically half the movie as she investigates Baxter Stockman while the Turtles chase down the alien tech.  She’s also in the most gratitious and most Michael Bayesque scene in the movie, the schoolgirl scene you probably saw in the trailer.  The tone of that scene is so incongruous to the playful and more kid friendly style of the rest of the movie that it almost feels like Bay himself directed it before leaving to go start Transformers 4.  It’s really the only scene that has his weird alpha bro mentality.

If you’re an old school Turtle fan or know a kid who is a fan of the new Nickelodeon show, Out of the Shadows should satisfy both, as it’s ridiculous in the best ways and is funny and action packed.  It’s got so much fan service in the characters featured and even easter eggs and references to prior Turtles properties.  It’s a huge step up from the first film and surprisingly one of the funnest movies this summer so far.

The Ninja Turtles Are Back and “Out of the Shadows” (Trailer)