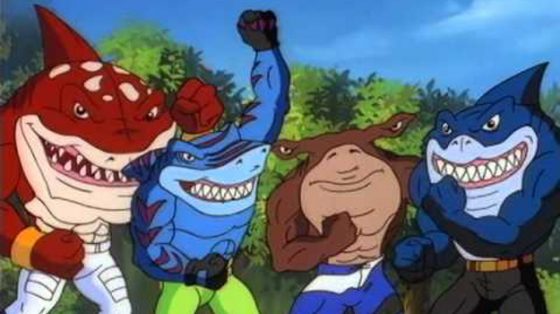 Our look back at great, weird and wonderful shows of the past is back for the summer and we’re kicking things off with one of the most ridiculously 90’s cartoons ever made, Street Sharks.

Did I Know Anything Before Watching?: I had a Streex figure as a kid and probably saw an odd episode here and there but I didn’t watch it every week like some other shows.

First and foremost, it needs to be said that Street Sharks is maybe the most blatant of the many shows that were trying to get a piece of that TMNT money, others being Biker Mice from Mars or Cowboys of Moo Mesa.  There’s basically a TMNT equivalent for each of the Street Sharks characters; main villain Dr. Paradigm is Shredder, mutant monsters Slobster and Slash are Bebop and Rocksteady, the Sharks’ ally Bends is Casey Jones, etc.  The Bolton brothers all channel a personality of one of the Turtles as well, roller blading Streex is the Mikey, oldest brother Ripster is the Leo, football playing beast Slammu is the Raph and I guess that leaves Jab as the Donnie (He made himself a jetpack, so I guess that means he “does machines”) They also replace the Turtles love pizza for burgers and hot dogs and Cowabunga becomes Jawesome.  It does also share the Turtles goofy charm though and that made this first episode pretty fun to revisit.

Things kick off with Dr. Robert Bolton breaking into his own lab to stop Dr. Paradigm from using his “Gene Slamming” device to create human animal hybrids.  Dr. Bolton arrives too late and Dr. Paradigm has already used his formula on a swordfish and lobster and then uses some unknown combination to turn Dr. Bolton into some sort of monstrous creature who then flees the lab.  Dr. Bolton might be the real villain of the series because he really should have stopped this way sooner, probably around the time Dr. Paradigm was somehow getting DNA samples of Ghengis Khan and Captain Blood for use in his research.  I love how Paradigm gives absolutely zero fucks about anything and one of my favorite scenes of the first episode is when he goes to the state university the next day and talks to his research assistant, Lena, who is worried that Dr. Bolton is missing.  Paradigm tells her to call Bolton’s sons and have them meet their father at an abandoned nuclear power plant but when she asks if he’s talked to Bolton, he doesn’t even bother to come up with an excuse and doesn’t even hide the distinctive wristwatch he stole from Bolton.  What makes the scene even more hilarious is that Lena just goes with it because Pardigm is her faculty advisor.

Anyway, the Bolton brothers arrive at the nuclear plant after the most 90’s extreme race across the city and are captured by Paradigm and turned into their shark alter egos.  Well, actually, it takes a while for the shark forms to emerge and Paradigm thinks he’s killed them, so he has his new henchmen Slobster and Slash dump them in an aquaduct.  In another hilarious moment, the duo believe they’ve found the best spot to dump the bodies and not ten second after they leave, a passing jogger sees both them and the bodies, but water washes the boys away before the cops can see them.  The boys recover and go to the park for some hot dogs, which is when their shark forms emerge.  They have to escape the police and end up on a freeway where they help a woman escape a car crash but she freaks out at their appearance and the boys run away again.  They eventually run into Bends, the surfer dude tech genius from the college, who helps them escape from the police after a big chase and they end up at the local amusement park, where the last big fight between Paradigm and the Sharks happens.  The Sharks get the upper hand but are arrested by the military as the episode ends.

One of the things I definitely did not remember about the show is that there seems to be some sort of social satire involving the environment.  The show takes place in Fission City, which is polluted to absurd levels by smog and carbon monoxide and there’s a helicopter traffic reporter who constantly reports on how bad things are but it never seems to factor into anything Paradigm or the Sharks are doing and all the normal citizens of the city seems to be fine.  I was also surprised how long it took for the Sharks to actually turn into Shark, it’s about 15 minutes into the episode before they transform and I also did not expect it to end on a cliffhanger.

As far as blatant knock offs go, Street Sharks is ridiculous but still pretty fun and there were some genuinely hilarious moments in the first episode, so check it out if you want a hit of 90’s nostalgia.