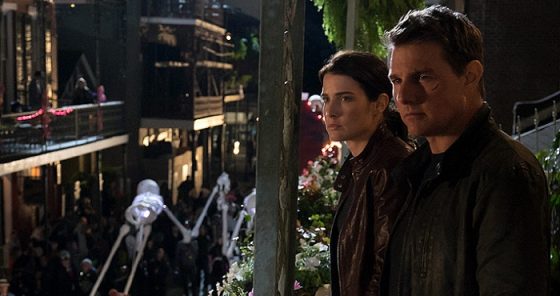 In a slightly bizarre move, the first trailer for Jack Reacher: Never Go Back, is contained within an annoying Entertainment Tonight feature, with voiceover from the hosts and breaks to co-star Cobie Smulders.  There still is plenty of ass kicking from Tom Cruise though, who’s Jack Reacher is still seemingly a master of almost every skill and is back to help Major Turner (Cobie Smulders), who took over the military police from Reacher but has been arrested on seemingly false charges.  She and Jack go on the run in an attempt to escape the men who want to kill her and clear her name.  The movie is directed by Edward Zwick, who directed Cruise in The Last Samurai, and it co-stars Robert Knepper and Holt McCallany.  It’s out on October 21st and you can check out this first look/trailer below.

Jack Reacher is Back and Ready to Kill Everyone (Trailer)