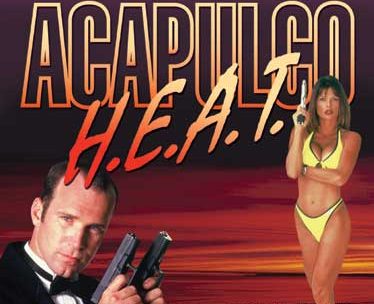 Hitting at the peak of the 90’s syndication mania that brought us such shows like Hercules, Xena, Baywatch and Star Trek: TNG, Acapulco HEAT arrived in 1993 and followed a covert team of operatives who fought criminals and terrorists out of the tropical locale of Puerto Vallarta, Mexico

Did I Know Anything Going In?:  Joe mentioned it on an episode of the podcast that I can’t find right now but I’d never seen a full episode, it apparently wasn’t part of my UPN/WB’s weekend lineup.

Acapulco HEAT follows the Hemisphere Emergency Action Team, which might be possibly the worst name for a cover team in history.  They are funded by a coalition of nations called the C-5 that doesn’t officially acknowledge them but gives them targets and assignments via Mr. Smith (John Vernon aka Dean Wormer from Animal House).  Leading the team is Ashley Hunter-Coddington (Catherine Oxenberg), who is a former MI6 agent and Mike Savage (Brendan Kelly), who is a former CIA agent.  The show tries right off the bat to make them a sort of Moonlighting bickering work couple but Mike is just kind of a dick, so it’s not quite as playful as the Bruce Willis/Cybill Shepherd dynamic.  The rest of the team are supposed to all have different specialties but they are so bland and terribly acted that they all kind of just blend together (it doesn’t help that the first episode doesn’t really introduce anyone or anything about what the hell HEAT is or does).  HEAT actually had the bizarre circumstance of ending it’s first season in 1994 but then the second season didn’t air until 1998 with a drastically thinned down cast, which, when you’re title sequence is over 2 minutes long, is probably something that needs to happen.

The first episode is a two parter where the team is after Strake, an assassin with a penchant for chess and female sidekicks.  Strake is the only person who seems to realize how stupid everything is, as he’s ridiculously over the top in every way.  During the opening assassination attempt in Rio, he’s literally dressed in a devil costume and has various objects that are actually filled with knockout gas,like apples and lighters and his preferred method of taking out targets involves one of his assistants putting a huge, obvious device on the target and then using a homing missile launcher to take them out.  The HEAT team chases him down and thinks that they blew him up with a remote control car, but Strake survives and arrives in Puerto Vallarta to take out someone at a major conference that is taking place at the Westin hotel run by Fabio.  Oh, did I forget to mention that Fabio is a main cast member on this show?  That should pretty much solidify the level we are working at for this show.  Anyway, there’s a lengthy swimsuit fashion show, lots of use of terrible 90’s technology by the group’s ditzy blonde tech expert and eventually a princess is kidnapped by Strake.

Baywatch is obviously the target for the makers behind Acapulco HEAT but I was really struck by how much it felt like a watered down Andy Sidaris movie, like the hilariously insane Hard Ticket to Hawaii:

Acapulco HEAT shares the same preference for hiring current or future Playboy Playmates and then having them get into stiff gun or fist fights and a tropical setting that was only chosen because it allows the cast to be in swimsuits for most of the episode.  One stupid detail about the setting that I love though is that the HEAT team has apparently taken over some priceless Incan ruins as their main base of operation and just filled it with pointless TVs, computers and joysticks.

Acapulco HEAT is definitely a product of it’s time and it’s mostly just an attempt to cash in on the popularity of Baywatch (There’s a reason we’re getting a Baywatch movie with The Rock and not an Acapulco HEAT movie).  If you watched it when it was airing, you might have some nostalgic feelings toward it but going in fresh, there’s so many better, more fun shows from that era of 90’s action/adventure.