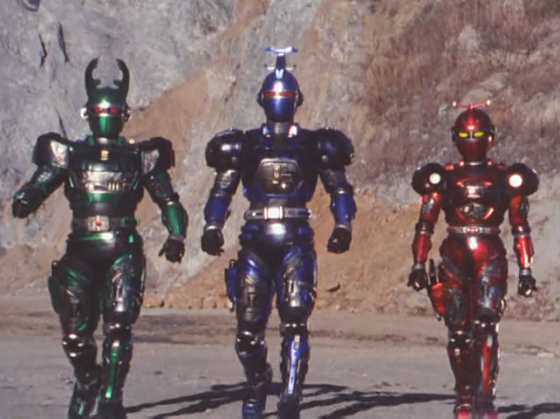 Did I Know Anything Going In?: I watched a handful of Beetleborgs episodes when I was a kid but I never really got into the same way I got into Power Rangers.

I really want to know what the pitch for Beetleborgs was because it’s such an insane mash up of seemingly unrelated ideas.  On the one hand, you have a wacky comedy featuring takes on the classic Universal Monsters like Dracula, Frankenstein’s Monster and The Mummy and on the other hand, you have a show where kids have super powers and fight comic book monsters as armored bug warriors.  The amount of cocaine needed to fuse those two things together is staggering to think about.

The first episode of Beetleborgs actually doesn’t really do a whole lot of Beetleborgs related things, as it’s mostly focused on the main trio of Drew, Roland and Jo exploring the supposedly haunted Hillhurst House in their hometown of Charterville after being dared to stay for an hour there by the bizarrely nerdy, rich bullies Trip and Van, who are like if a young Bill Gates was the villain of an 80’s movie instead of, say, Billy Zabka.  While in the house, the trio run afoul of Mums, a mummy who can remove his bandages to appear like a grim reaper, which according to Wikipedia, only happens in this episode and Franknbeans, the dumb version of The Monster from Frankenstein.  Stumbling into a secret passage, the kids find and accidentally play a pipe organ, which unleashes the phantasm Flabber, played by Billy Forester.  Someone at Saban 100% wanted a Jim Carrey like character on one of their shows, since he was so hot at that time, and Flabber is just a never ending series of impressions and twitches while dressed like Elvis and looking like Jay Leno.  Flabber gives the kids a wish for freeing him and they wish to be Beetleborgs, but the episode ends before we see them transform.  The only glimpse of a Beetleborg is earlier in the episode when Drew is having a daydream about being the blue Beetleborg and saving his crush, Heather, who works at Zoom Comics, which is run by Roland’s dad and grandma, Nano, easily the best character on the show, as she’s a sassy biker grandma who runs a comic book shop.

Unlike Power Rangers or VR Troopers, the main actors on Beetleborgs are kids and this is probably their first ever job so, as you might expect, they are all pretty terrible.  They are pretty much unbelievable and awful in pretty much every scenario, not even running down a hallway while yelling convincingly.  It’s clear the producers were banking all their money that Flabber would carry the show, as he pretty much takes over once he’s unleashed and even dominates the ending credits.

It’s pretty clear watching the first episode of Beetleborgs why it didn’t stick with me like Power Rangers.  It’s just a cocaine fueled insane mess of a bunch of different ideas and the main trio is just terrible and annoying.  The only really memorable thing is Flabber and that’s only because it’s hilarious now because he’s like the ghost of Jay Leno: