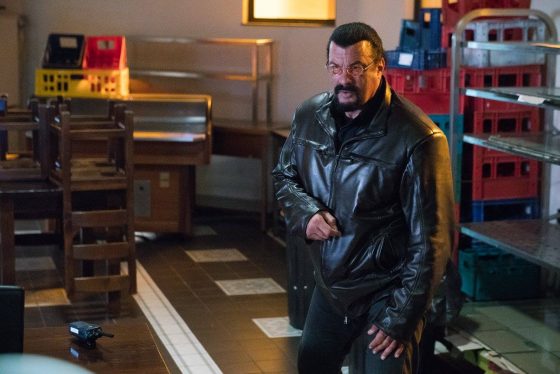 The latest from Steven Seagal, Contract to Kill is out today (12/9) on VOD and in select theaters.

The plot of Contract to Kill feels cobbled together from the most paranoid youtube conspiracy theorists as it concerns an alliance between the Mexican drug cartels and Islamic extremists to smuggle terrorists into the US and the CIA hires John Harmon (Seagal), the best “wet mechanic” in the biz to stop them.  Harmon gathers a team including his old flame, and CIA agent, Zara (Jemma Dallender) and Sharp (Russell Wong) an expert in drones, and they head to the meeting place of the two groups in Istanbul.  Most of the plot is delivered in insanely long winded briefings by Seagal that take up about 80% of the movie and gives the aging action star lots of opportunity to just sit and not really do anything.  There have been a few movies recently where you can tell Seagal is actually into what’s going on, like the aforementioned Machete, the wonderfully insane first season of True Justice or his team up with Stone Cold Steve Austin in Maximum Conviction but that doesn’t seem to be the case here.  There’s tons of horrible green screen, fights consist of Seagal not moving and having people just come up to him and a climactic showdown with a villain takes place on a couch. Even when Seagal isn’t on screen, there’s tons of horrible film making on display, like egregious repeated scene use and blatant ADR and all of the acting is flat and lifeless.  There’s a difference between fun bad and bad bad and this falls more on the latter side of things.  There’s barely any action and what is there is sloppy and terrible, with quick edits that make a lot of it indecipherable.  There’s a few glimmers of fun bad throughout though, like bar patrons in Mexico who are clearly from Eastern Europe, Seagal beating a man to death with what seems like a Festivus pole, Sharp using the most conspicious, loud and brightly lit drone for an undercover op and some bizarre line readings from Seagal but mostly this movie is a slog.  There’s been far worse latter day Seagal movies, like the horrendous Attack Force but this is not much better and it’s kind of strange that this is the one that got chosen for a theatrical release.

Contract to Kill is a terrible Seagal movie even in the current era of terrible Seagal movies.  It has all of the worst habits of latter day Seagal, which mainly revolves around him trying to avoid any movement, and is mainly just an actionless slog through whispered Seagal exposition dumps.  If you’re looking for more fun, ridiculous Seagal action, check out any of the episodes of the first season of True Justice or the Stone Cold team up in Maximum Conviction.