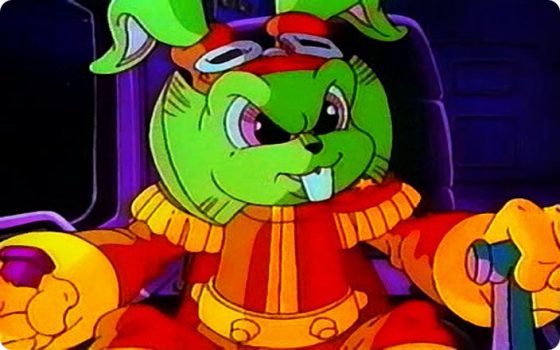 While there’s a new ragtag group of rebels in theaters for Rogue One, back in the 90’s there was another group waging war against an evil empire led by Captain Bucky O’Hare

Episode Title: War of the Warts

Did I Know Anything Going In?: I’ve played the NES game and I’ve heard and seen the intro and knew the characters but I’ve never seen an entire episode before now.

If anything was primed to be the next TMNT, it was Bucky O’Hare.  Just like the Turtles, Bucky and his crew started out in much gritter cult comics written by Larry Hama and Michael Golden that got transformed into a cartoon, action figures (by Playmates, the same company behind the TMNT figures) and the aforementioned games, including a sweet arcade beat em up.

The premise of the show is that in an alternate dimension called the Aniverse, the Toad Empire is taking over the universe under the guidance of an evil AI called Complex that has devoted the Toad society to becoming a military force.  The other animals in the universe, mostly mammals, have a UN like nation called SPACE but they are slow to recognize the threat the Toads represent and only authorize one ship to go on the offensive, Bucky O’Hare’s Righteous Indignation.  He leads his crew, which includes the psychic First Mate Jenny, gunner Deadeye Duck, Android mechanic Blinky and mechanic/fighter Bruce, and they engage in guerrilla battles against the Toads, usually against the space fleet commanded by the arrogant and incompetent Air Marshall.  I really enjoyed that the show didn’t really spell any of this out, it picks up with things having been going on for a while and you just jump in to the latest Bucky adventure.

The first episode follows Bucky and co. as they rescue a group of hares who were taken from Bucky’s homeplanet, Warren, that has been recently taken over by the Air Marshall’s forces.  Bucky goes to SPACE and demands more support but they require more evidence of evil doings, so Bucky and the crew head back out but are ambushed by a fleet of Toad fighters and their photon accelerator is damaged.  Bruce tries to repair it but is sucked into another dimension.  Meanwhile on Earth in our dimension, nerdy kid Willy DuWitt is also working on a photon accelerator and he turns his on at the same time Blinky turns the Righteous Indignation’s back on and a literal doorway is opened between the universes.  To Willy’s credit, he is extremely chill about finding an entire new dimension and immediately agrees to help fix the Indignation’s warp drive and they are able to warp out just in time before their shields fail under the Toad assault.

It’s not really clear why Bucky never really hit the same heights of TMNT.  It’s become a cult show and there’s actually a new line of collectible figures coming out in the near future but the original figure line was cancelled after the first wave, even though a second and third line were extremely far along and the show only lasted 13 episodes.  It’s an extremely fun show that basically combines Star Wars with TMNT and it’s definitely worth checking out.