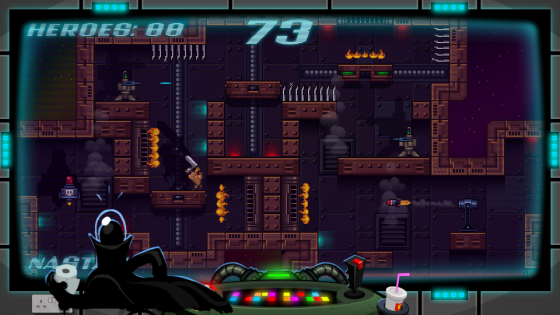 We’ll be heading to PAX East a week from today but before we head to Boston, we got the chance to check out a ton of games ranging from hyper challenging platformers to RTS to…fighting Blackjack?

88 Heroes: 88 Heroes is from the same team that made Super House of Dead Ninjas and it’s another crazy, fast paced platformer.  Dr. H8 is threatening the world and has demanded 88 octillion dollars or else he will launch nuclear warheads to destroy the Earth.  Unfortunately, the good superheroes are all busy so the 88 Heroes are the only chance the Earth has.  The game consists of 88 levels that you have to guide the heroes through.  You’ll take control of a different, random hero at the start of each level, all of them featuring vastly different abilities and usefulness.  For instance, Miss Fortune can flip a coin and has a 50/50 chance of either going right to the exit or dying immediately and there’s also spoofs on Conan, 007, the TMNT and old school gaming characters like Snake or Pitfall Harry.  It’s completely ridiculous but also really intense as far as the platforming goes, so despite it’s goofy characters, it will be a challenge for old school platforming fans.  Keep an eye on their site but it will be out sometime this month.

Mr Shifty Beta: Published by TinyBuild, Mr Shifty will be out this summer but we got the chance to check out the beta and if you ever wanted to play the opening of X2: X-Men United, this is your game.  You play as a secret agent with a teleportation ability that lets him blast through walls and get the jump on guards in his way.  It’s extremely fast paced and you feel the power right off the bat and there’s a cool mechanic where you can dodge at the last second and get slo mo going and you can also break and pick up items to use as weapons.  We may see more at PAX East next week but it’s going to be out on Steam and the Nintendo Switch in April.

Dystoria: Taking inspiration from Tron, Tempest and The Last Starfighter, Dystoria is an old school throwback where you play a regular 80’s kid abducted by aliens and put into the Dystoria training simulator to test humanity’s abilities.  In the simulator, you pilot a ship and can navigate onto any flat surface, which opens up a ton of areas for secrets and hidden collectibles.  Your main goal in each level is to find three orbs and then get to an exit but there are bonuses for finding all the hidden “nucleons”, which are your currency, killing all enemies and beating the level in a certain amount of time.  Things start out fairly simple but it quickly gets insane with moving platforms, multiple areas connected via portals and orbs hidden under and over the levels.  You also gather salvage from destroyed enemies and, combined with the nucleons, you can unlock new ships and weapons.  The movement and navigation is pretty unique and it has a fantastic look and a great soundtrack.

Slime-San (Preview): If you’ve been jonesing for more of the intense, pin point accurate platforming of Super Meat Boy, Slime-San needs to be on your radar when it releases in April.  We got to check out a preview build and it plays just as great as that aforementioned platformer, with some added abilities that sets it apart.  Slime-San is just a regular, normal slime who gets eaten by a gigantic worm and has to make his way through the worm’s intestines to escape.  Slime-San can morph into a transparent form, which lets him pass through certain barriers and also slows down time and the game keeps throwing new tests of those abilities, including floors that are super slick or sticky and it ups the difficulty a bit from Meat Boy by having a time limit on the levels that, if reached, the level will start filling with digestive acid (although some levels have instant time limits as the rising acid is required to pass).  There is also a town built up in the worm’s bowels filled with devoured animals where Slime-San can buy upgrades or cosmetic items.  It seems like basically if you combined the gameplay of Super Meat Boy with the quirky characters and visual stye of Undertale and, even in the beta, it plays perfectly.

Super Blackjack Battle II Turbo Edition: Street Fighter 2 has inspired lots of imitators and homages over the years but Super Black Battle II Turbo may be the strangest. Turning Blackjack into 1v1 competition, you choose from various card players from around the world and then take on all the rest ot become the Blackjack champion of the world.  Each match is set over 10 rounds and you win if either your opponent loses all their money or you have the most money at the end of 10 rounds.  Despite the fighting game trappings, this is still 100% a Blackjack video game, so if you don’t know how to play Blackjack, you will probably be lost if you don’t know what hitting, standing or splitting are. One disappointment is that all the characters play the same and it would have been fun, and leaning even more into the fighting game inspirations, if maybe each of them had some sort of special move to manipulate the cards or effect their opponent.  If you fall in the middle of the venn diagram between Street Fighter fans and Blackjack fans, this is a pretty fun mashup but the visuals and style is better than the gameplay.

Northgard: Currently in Early Access (and burning up the Steam charts), Northgard is a Viking themed RTS where you take control of a Viking clan and have to expand your settlement, gather resources and battle other clans for supremacy.  You start out with basic villagers and you can build various buildings to turn them into other classes, like warriors or hunters, and there are various spots on the map that have minerals, fertile land for farms, animals to hunt, etc.  One of the most important classes is the Scout, who will explore and show you the nearby cells of land and you can “colonize” them at the expense of food but you also have to keep in mind that you need enough food to make it through winter.  There’s a ton to keep track of and if you’re an RTS vet, you’ll probably be right at home but, if you haven’t played an RTS in a while, or ever, it could be a little overwhelming.  Currently there is only a randomly generated single player mode but multiplayer and a campaign are coming as the game develops.  If you’re a fan of things like Civilization but want to focus exclusively on vikings and Norse mythology, this is probably one you want to check out.

Sublevel Zero Redux: Already out on PC, Sublevel Zero Redux will hit PS4 and Xbox One on March 8th (March 7th in Europe) and if you have been waiting for a new Descent, this is your game.  Giving you the same freedom of movement of those PC classics, you play a pilot who is investigating a mysterious installation in a universe that is falling apart.  The modern addition to the Descent style gameplay is rogue-like elements like crafting weapons and loot and your mission in each section is to find a reactor and destroy it while fighting off the installation’s automated defenses.  The game looks amazing but, maybe it’s just me, but I was completely and utterly lost even in the first section, as the map didn’t seem to me like it gave enough info and, besides numbers on the wall, it feels like everything is the same, except just different colors.  If you’re a hardcore Descent fan, this will probably scratch that itch you’ve had since the 90’s but, personally, I need a little bit more direction.

A Pixel Story: In 2015 there was a great platformer called Adventures of Pip where your hero could transform between different graphical styles that would give him different abilities and this year, there’s a similar game called A Pixel Story.  The main difference is that A Pixel Story is much more meta, setting itself directly in the world of video games as your hero fights through various worlds to stop The Overlord from taking over the universe.  A Pixel Story is a platformer but it’s main mechanic is a magical, and somehow familiar, floppy red hat that you can place and then teleport back to, which is the key to many of the puzzles and platforming challenges of the game.  You’ll run into various residents of the gaming world that you’ll need to complete various missions for to progress and you have help from a snarky AI named Search in your quest.  The teleporting mechanic is really clever but the game feels a tad slow, especially after also recently playing the aforementioned, lightning fast Slime-San but if you are looking for a slower paced platformer that will test your brain and your reflexes, this is one definitely worth checking out and it’s available on PC and console.