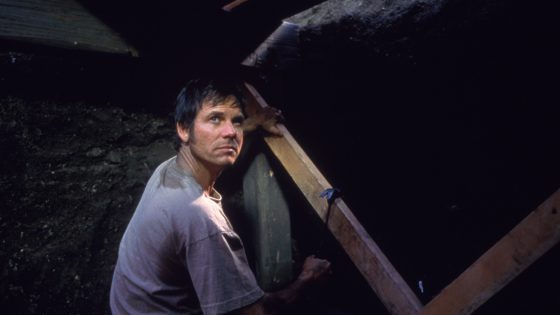 For the latest Everything Action commentary, Zach, Chris and Chris Ali watched 2001’s Frailty in honor of the late Bill Paxton, who stars and directs this thriller.  Paxton is a single dad in the 70’s who claims to start receiving visions and instructions from God, giving him a list of “demons” that he must destroy with a special ax.  “Dad” claims to be able to see the demons true form of but his oldest son, Fenton, doesn’t believe in the visions.  Matthew McConaughey plays the grown up Fenton (or does he?) and Powers Boothe plays an FBI agent investigating the killing spree of the God’s Hand killer, which grown Fenton claims his his brother Adam continuing their father’s work.  The guys try to wrap their head around Paxton’s genuine fathering with his murder spree, figure out if maybe the fumes from Dad’s job as a mechanic might be the culprit of the visions, the endless hole digging and much more.  You can sync up our commentary with Frailty on Netflix, and check it out with the Everything Action crew.

We want to hear your comments and feedback. Send them all to contact@everythingaction.com. Also, be sure to subscribe, rate and review us in the iTunes music store (https://itunes.apple.com/us/podcast/everything-action/id368044198?mt=2) and follow us on twitter @evaction, Facebook (www.facebook.com/everything.action) and Tumblr (everythingaction.tumblr.com)

Movie of the Month: Frailty