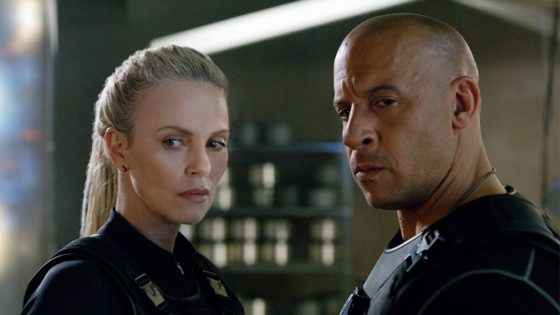 The Fast & Furious franchise continues to try and top itself with every new entry and for Fate of the Furious, the seemingly impossible happens as Dom (Vin Diesel) goes against his family and joins forces with evil cyberterrorist Cipher (Charlize Theron) on her mission to put the world superpowers on notice with a scheme involving EMP weapons and nuclear missiles.

Dom and Letty (Michelle Rodriguez) are honeymooning in Cuba, where Dom engages in a ridiculous opening race to bail out his, heretofore never mentioned cousin, when Cipher approaches him and shows him something that makes him betray Hobbs (Dwayne Johnson) and the team while they are trying to retrieve the aforementioned EMP weapon before terrorists can get it.  Hobbs is thrown in jail and the rest of team is left reeling until Mr. Nobody (Kurt Russell) regroups them and tasks them with finding Dom and Cipher and brings in Deckard Shaw (Jason Statham) to help, as he and Hobbs are only two men to successfully track Dom.  There’s also Scott Eastwood’s Lil Nobody, who is a rookie CIA agent under Nobody and an extremely blunt attempt to replace Paul Walker that utterly fails.  Eastwood has no chemistry with anybody on the team and is just a bland buzzkill for most of the movie.  Tej (Ludacris), Roman (Tyrese) and Ramsey (Nathalie Emmanuel) round out the usual crew and there’s some cameos from prior crew members sprinkled throughout as well.  Everyone is doing their usual thing and it’s still fun, like Roman’s constant complaining and getting into trouble, but it’s also getting a little stale and it doesn’t help that The Rock and Jason Statham are operating on another level entirely.  Their escape from prison is easily one of the best sequences in the movie, as The Rock goes full Incredible Hulk and shakes off point blank rubber bullet shotgun blasts while piledriving guards and prisoners alike while Statham parkours his way through the chaos.  Statham also has a sequence aboard a plane during the climax that is as hilarious as it is exciting.  The finale involving the gang chasing down a rogue submarine is also incredible and on par with anything seen since Fast Five.

One of the best things about the Fast & Furious series since Fast Five has been their extreme attention to the canon that is only rivaled by something like the Marvel movies.  Fate does a great job of acknowledging the events of the prior movies, like keeping Furious 7’s MacGuffin God’s Eye in play and tying Cipher into the past of both Deckard and Owen Shaw.  The reason Dom goes rogue is also tied directly to Fast Five and it’s fairly obvious once it’s revealed but also makes sense as something that would drive Dom to do what he does.  One thing that seemed like a glaring omission however is that there’s no mention or repercussions for Deckard killing Han and blowing up the gang’s LA home, which seems like it would be unforgivable to Dom and the family but all is seemingly forgiven by the end of the movie.  Deckard and Hobbs have some great smack talk for most of the movie, and especially when in prison together, but nothing more serious than that.

It might sound blasphemous, but I think it might be time for Dom’s crew to sit out for a movie or two, especially with where Dom and Letty end up in Fate, and I would literally kill for the Hobbs solo movie or a Shaw family movie that seems to be teased here with the amazing cameo by Helen Mirren as the Shaw matriarch.  Deckard and Hobbs are more than capable of carrying an entire spin-off by themselves or, dear God please, together, but because of Vin Diesel’s producing clout (and ego?), everything will probably still revolve around Dom and the family, even though it feels like we are extremely close to have exhausted everything we can with that group.  This movie also made so much money that the gravy train is definitely not going to end soon but if you were to give me the choice between seeing Furious 9 and a Hobbs and/or Deckard spin-off, it’s a no-brainer for me.

Fate of the Furious is another solid entry in the franchise with some great action sequences and The Rock and Jason Statham steal the show.  I don’t think it’s the best entry in the series, as nothing will probably ever beat Fast Five, but it’s probably in the top 5 somewhere and it has all the ridiculous action and banter that you’ve come to expect from the franchise.