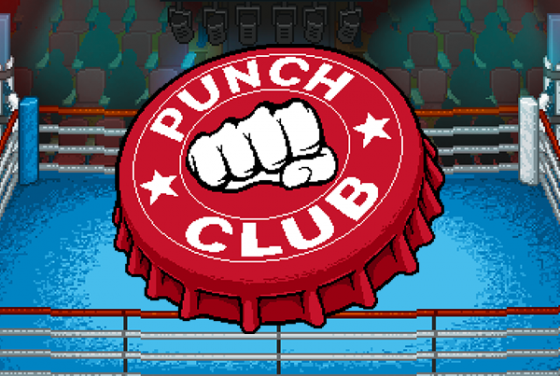 Get your fists ready, the turn based RPG fighting game Punch Club is now available for Xbox One & PS4. Zach reviewed the PC version of Punch Club back when it first was released in January 2016, and he raved about all the crazy plot points, characters and retro details that make up the game. I jumped on the chance to experience Punch Club from a rookie perspective and see if I had what it took to avenge my father’s death, be a fighting legend and become the Dark Fist!

For those not in the club, Punch Club is Lazy Bear Games & TinyBuild’s crazy take on RPGs and fighting games. The player controls a Fighter working his way into various fighting circuits and become the greatest Martial Arts champion. Along the way, the Fighter will encounter friends and foes that will lead you to solving the mysteries of the city and find the killer of the Fighter’s father.

You start at the bottom of the rankings as a Fighter, so you’re gonna have to train hard, fight hard (and save…hard) in order to rise in the fighting circuits. There is a micromanagement system of the Fighter’s own bodily resources (health, food, attitude and energy levels), and creating a tight financial budget so the Fighter doesn’t go broke while training. The fighter has two main ways to earn money, both will use up the fighter’s resources and there is different methods to train that cost both money and resources. Juggling between work, training and eating a proper diet that will give you energy to do activities is just one part of the overall gameplay of Punch Club.

Once the basics of working & training is understood, the real fun of building the Fighter’s martial art style begins. The Fighter starts with one balanced style that can utilize the starter stats and offers some special moves that do not have many requirements. I’d be honest and say that I tried to do what came naturally in the game and went for big flashy punch moves, and built most of my muscle strength meter (I wanted to be the One Punch of the Amateur circuit). However, after a 4 fight losing streak, I had to change up the training routine and save up to buy better quality food items (Pro Tip: Stock up on $20 steaks early when you can! In real life and in game!).  Stronger opponents need better fighting moves to be taken down with, so building up a style and customizing the Fighter for the right fight is essential if you want to conquer the circuits.

There are side quest and mini events through the game that has the Fighter help friends and take on super powered foes. The Fighter’s adventure around the city will lead him to find out the city is in need of a hero, and the Fighter will be destined to become the justice avenging hero known as Dark Fist, and challenge villainous foes that threaten to corrupt the city. All of these side plots are filled with awesome references and background characters (What game has a Fight Club character and Jay & Silent Bob?) that will make any super geek fan have a nostalgic laugh.

As of March 31 2017, Punch Club is now released on almost every modern gaming device, so I highly recommend getting a copy and become a fighting legend today.