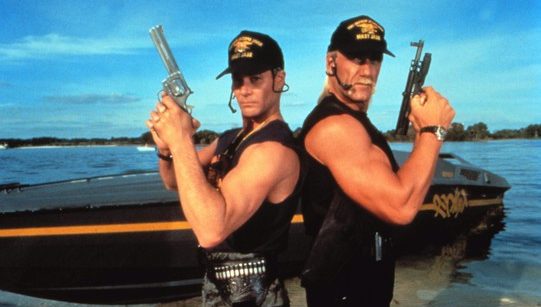 Closing out this month of vehicular action shows, we have one of the few, possibly only, shows to center around a high tech boat, Thunder in Paradise.

Did I Know Anything Going In?: Besides that it starred the Hulkster, not really.

Starring Hulk Hogan during his days in the WCW, Thunder in Paradise follows Spencer (Hogan) and his buddy Bru (Chris Lemmon), two ex-Navy SEALs who have developed a high tech attack boat nicknamed Thunder that they hope will secure them a lucrative government contract, as Spencer has sunk his entire savings into the project.  Like most of shows we’ve covered this month, and most shows that ran in syndication, Thunder in Paradise started out as a TV movie and that’s probably the most widely seen version of the show.  Three “movies” were made that combined two part episodes and that’s really the only release for the show on DVD, as no full season set has been released.  At the beginning of this first episode, Spencer and Bru are basically committing a war crime by attacking Cuba to rescue the wife and son of a friend back in Florida, which shows off most of the gadgets and features of Thunder, including it’s insanely spacious inner cabin command center and the launchable jet ski nicknamed Trigger that Spencer uses to infiltrate and rescue their targets.  That’s probably the most actiony part of the episode however, as Thunder in Paradise turns into a wacky 90’s comedy where an evil British businessman, Edward Whitaker (Patrick McNee of the 60’s show The Avengers) arrives at the happening beach hotel run by his niece, Megan(Felicity Waterman), and enforces a bizarre clause in her father’s will that says she’ll lose the hotel if she’s not married.  With some prodding from sassy New York ex-pat bartender Kelly (Carol Alt), Megan decides to try and get Spencer to agree to a sham marriage and she’ll pay off his debts, which he agrees to do.  After the Cuba opening, the episode just sort of meanders from wacky scene to wacky scene, including Spencer and Bru having a fake karate fight, Spencer arm wrestling a guy who punched him in the face earlier while Jimmy Hart looks on, montages of girls in bikinis and other blatant filler.

The actual plot of the episode is that Spencer gives his new step-daughter, Jessica (Robin Weisman) a necklace he pulls out of the stomach of a hammerhead shark and it has a secret treasure map on it that pirate leader Sam Jones (Back from last week’s episode of Cobra) wants to steal and he tries and fails to do so at Spencer and Megan’s wedding.  The necklace breaks in the scuffle and Spencer and the gang discover the map after piecing together the bronze beads that makes it up.  The necklace turns out to have been made by a prolific thief while he was in prison and could lead to his cache of stolen goods, including millions in gold and diamonds.  Spencer, Bru and Megan decide to take Thunder to the island location detailed on the map and try and get the treasure but Sam Jones aka Kilmer kidnaps Jessica and Kelly and uses the drawing that Jessica had been drawing to follow Thunder to the island.  Spencer and the gang find the treasure in a secret cave but are ambushed by Kilmer and his men and are forced to hand over the treasure and are left to die when he reseals the cave entrance.  A pool of saltwater in the cave leads Bru and Spencer to figure there’s a way out to the ocean and Spencer dives in to find it for what seems like forever.  The group escapes and makes it back into Thunder and Spencer puts on some war paint and goes to Kilmer’s ship to rescue Jessica and Kelly but he’s captured and thrown overboard wrapped in chains.  Deciding he hasn’t been evil enough, Kilmer also throws Jessica and Kelly overboard as well.  Spencer frees himself and Bru dives out of Thunder to bring them air and everyone makes it back to Thunder and try to escape but Kilmer launches a Stinger missile at them.  Spencer kicks on Thunder’s boost jets and manages to lead the missile back toward the ship and pulls away at the last second to blow up the ship.

Back at the hotel, Spencer and Megan have awkward and disturbing fake sex to continue to fool her uncle, as Bru previously swept the hotel and found surveillance equipment all over the place.

Thunder in Paradise is completely ridiculous but mostly in a “so bad it’s good” way.  The 90’sness, especially the clothes, is out of control (there’s neon colored bikinis and Zubaz as far as the eye can see) and it’s borderline cartoonish at times, like when Spencer lifts basically an entire tree and hits four Cuban goons with it.  If you were expecting a straight action show, this was probably disappointing and there’s nowhere near enough boat action for a show based around a high tech power boat but if you want a ridiculous time capsule to peak Hogan times, you might want to check it out if never have.