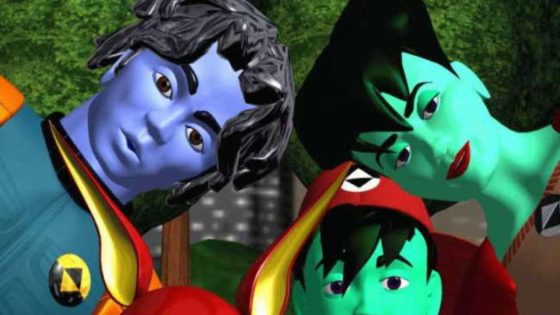 Back in the mid-90’s, CG animation was blowing up but a year before Toy Story changed the game forever, Reboot was the first half-hour, fully CG cartoon.

Did I Know Anything Going In?: I saw a bunch of Reboot when I was growing up but it was on at a weird time, like early morning, 6 AM on a Saturday, so I never watched it start to finish, just caught random episodes here and there.

Heavily inspired by things like Tron and originally coming out of Canada, Reboot created an entire world that exists within a computer called Mainframe where benevolent programs like diner owner Dot and “Guardian” (or as we know it now, anti-virus) Bob work to keep the systems going and fighting against viruses like Megabyte and Hexadecimal.  The “user” aka the person who apparently owns the computer, launches games into Mainframe as well that Bob and company have to enter and win, or else the entire sector where the game entered is destroyed.  There’s lots of computer in-jokes, especially in the dialogue where everyone uses computer terms like ctrl+alt+del or copy and paste as slang, and it’s definitely riding that early wave of the 90’s where everyone was “surfing the net” and computers were becoming a basic part of life.  There’s also a bunch of nerdy pop culture references as well to things like Star Trek, Aliens, Jurassic Park and more.  The CG animation is definitely crude and clunky by current standards but, to me, it’s charmingly clunky and the voice cast is pretty solid and manages to work past the limitations of the stiffness of the animation, especially the legendary Tony Jay as Megabyte, who channels a sort of refined, Tim Curryesque performance as Megabyte.

The main plot of the first episodes, which kind of just dumps you into the world of Mainframe without a ton of exposition or backstory, finds Bob being propositioned by Megabyte to perform a small favor for him and using mafia tactics like roughing up Dot’s Diner when he refuses.  (Sidenote: why do computer programs need a 50’s style diner?)  After playing, literally, Pong with wise program Fong, Bob decides to see exactly what Megabyte is up to and finds that a “tear” has opened up in Megabyte’s lair that, if stabilized, can let Megabyte infect the Super Computer and basically destroy the entire world.  Bob refuses again but is almost forced into stabilizing the tear until Dot shows up and the pair try to escape but an incoming game launches right on Megabyte’s lair and everyone is forced into a Star Wars/Wing Commander space fighter game where Dot and Bob have to stop Megabyte before he gets to the tear, which because it’s now in a game is stabilized.  The games were always the most fun aspect of Reboot as they were completely unrestrained by the rest of the show and could be any genre or style.  This episode was a space shooter but the next one could be a fantasy role playing game, a racing game or, really, anything.  Bob and Dot manage to win the game and Bob enters the Super Computer and seals off the tear, defeating Megabyte for the time being.  The one weird thing about Reboot is that the villains are kind of casual in their villainy and the heroes are really lenient as well.  Megabyte is just sitting in a giant sinister tower in the middle of Mainframe but no one seems to care or do anything about it.

Reboot is pretty nostalgic for me and, despite it’s clunky animation, it’s still a fun and pretty clever animated series.  The people behind it were clearly computer and pop culture nerds and the show is littered with in-jokes and references and the game concept let them really go nuts each episode with vastly different scenarios and the villains especially are great, memorable characters.  I found a bunch of episodes on YouTube but you can also get the complete series from Shout Factory! and a reboot of Reboot is apparently on the way to Canada’s YTV network called ReBoot: The Guardian Code, that will mix live action and CG animation.