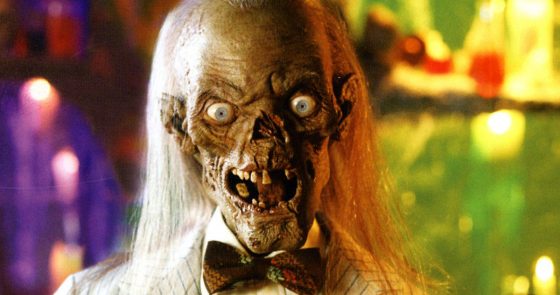 Back in the 90’s when Tales from the Crypt debuted on HBO, the Crypt Keeper (voiced by the great John Kassir) became one of the biggest pop culture icons ever with his zest for death and his unlimited number of puns.  There were action figures, reprints of the classic EC comics, radio versions of episodes, a cartoon and, the most definite factor of world domination, a Legends of the Hidden Templeesque kids game show but what we are interested in today is the official soundtrack.  Along with featuring some of the iconic music composed by Danny Elfman, the soundtrack album also had The Crypt Jam, maybe the most wondefully cheesy pop culture rap ever.  Backed by 90’s hip hop dancers and DJs, The Crypt Keeper unleashes an onslaught of puns for maybe the ultimate Halloween party jam.  It definitely needs to get added immediately to your Spotify Halloween play list and you can check out the fantastic official music video below.