It’s been a sad decade for fans of the Friday The 13th series. We’ve heard neither “kee-kee-kee” nor “ah-ah-ah” from Jason Voorhees since the 2009 remake, despite its commercial success and (generally) positive fan response. It marks the longest run without a Friday The 13th movie in the history of the franchise. Lucky for us, a talented group of passionate fans has brought the big man back to life with “Never Hike Alone.”

Now, I know what you’re thinking. But this isn’t your average fan film. Far from it.

“Never Hike Alone” follows Kyle McLeod (Andrew Leighty), an experienced hiker and aspiring vlogger filming his trek through the Catskill Mountains region. His plans change when he discovers the abandoned remains of the infamous Camp Crystal Lake, home to the legend of Jason Voorhees.

From there… Well… Y’know. 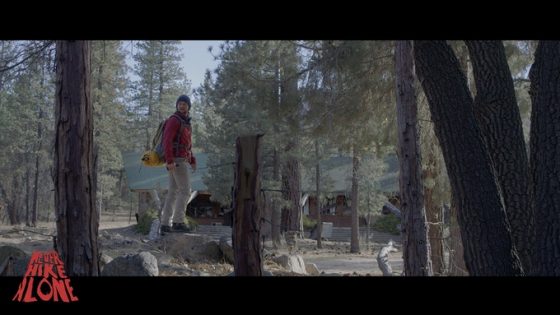 The successful Kickstarter campaign for this film, which exceeded its funding goal by nearly $6k, didn’t hurt. But neither did having a group of capable filmmakers who wanted to resurrect the man behind the mask. The team at Womp Stomp Films, led by Vincente and Sarah DiSanti, has worked together on several films since 2008. Though it was their first release under the Womp Stomp Films label, it wasn’t their first rodeo. And it shows.

Beyond the high production value, one thing that stands out about “Never Hike Alone” is its pacing. Clocking in at just under 54 minutes, there’s no fat on this story. Kyle is in the woods because he’s a hiker. He’s filming because he’s a blogger. This is not the typical group of oblivious sexy teens partying at the lake. The main benefit here is that there’s no need to introduce character backstories. You don’t need to establish the prude, stoner, loner, and jock characters.

This is a good thing for viewers. It gives Jason more on-screen time.

Speaking of Jason, they nailed him. Vincente DiSanti donned the hockey mask for this production. But though the idea of the filmmaker starring as Jason Voorhees might be cringe-worthy, he did the character justice. Now, don’t get me wrong. He’s not Kane Hodder. But in his defense, nobody is. Kane is Jason. So when someone else takes on the role, it immediately feels a bit off. Luckily, DiSanti is clearly a die-hard fan and successfully pulls off many of the iconic Jasonisms fans have come to expect from their favorite slasher. 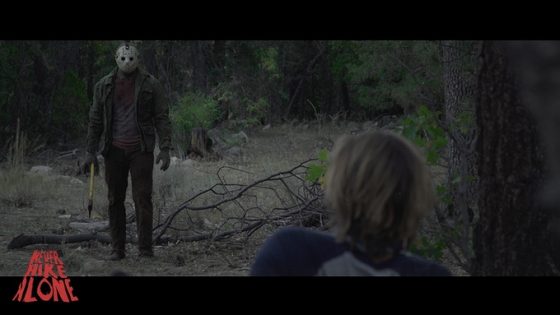 One of the most entertaining aspects of “Never Hike Alone” is the fact that Kyle is a competent hero. He’s not haunted by a troubled past. Other than being aware of the Pamela Voorhees murders and legend surrounding her drowned son, he has no link to Camp Crystal Lake. And no, he doesn’t have telekinetic powers. Instead, he’s simply a capable outdoorsman who knows how to survive in the woods.

Part of what makes Kyle work as a character is the performance of Andrew Leighty. Sure, he’s easy on the eyes. But considering that it’s basically just him on screen for most of the movie, he has to be magnetic. A good way to describe him would be a mix of the best aspects of Charlie Hunnam and Stephen Amell. Without someone like Andrew playing someone like Kyle, I don’t think this story could’ve worked.

Perhaps my favorite thing about “Never Hike Alone” is how it fits into the Friday The 13th franchise. Womp Stomp Films did their homework, and it shows. From dealing with the real-life fallout of the Pamela Voorhees murders to including an unexpected fan-pleasing cameo toward the end, it’s clear where “Never Hike Alone” fits in the Friday The 13th universe. The impressive thing isn’t just that they thought about this. It’s that they did so without beating you over the head with exposition and without backing themselves into a timeline corner.

And let’s not forget about the historical achievement they accomplished with “Never Hike Alone.” Remember the “found footage Jason movie” story making the rounds a few years ago? Well, that never panned out. But Womp Stomp Films managed to fold in elements of found footage storytelling into a Friday The 13th movie. And you know what? It works. In fact, it shows just how cool this medium can be when you use it the right way.

“Never Hike Alone” is a welcome addition to the Friday The 13th mythos. Not only does it show the potential for outside-the-box storytelling within the established universe, it does so without ever feeling gimmicky. I believe this will do for horror fan films what Batman: Dead End did for comic fan films. But even if it doesn’t lead to more fans telling their own stories in the Camp Crystal Lake sandbox, it makes me hopeful knowing that people like DiSanti could potentially – hopefully – be a part of future series installments.

Remember, the next film in the Friday The 13th franchise will be the 13th in the series. It needs to be the film that the franchise, its characters, and fans deserve. That said, I think the folks keeping it in development hell could do a lot of good to watch “Never Hike Alone.” Take notes. And when you’re done, give Womp Stomp Films a call. You’ll be glad you did.

“Never Hike Alone” is the Friday The 13th fan film that is on par with most of the official franchise installments without ever feeling like an amateur attempt. Jason might be at the bottom of Crystal Lake, but Womp Stomp Films shows that he’s alive and well…and waiting.