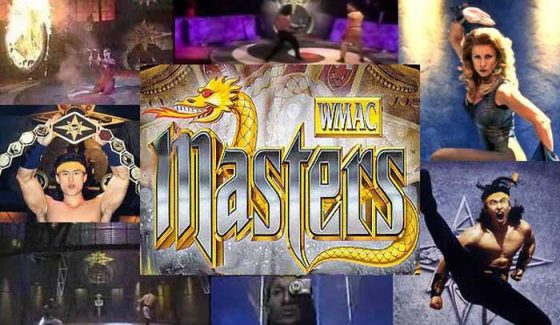 Auto Pilot is back again for the summer and we’re kicking off our look back at first episodes for classic, forgotten or just plain weird shows with a syndicated cult classic that combined at least half a dozen mid 90’s trends, WMAC Masters

Original Airdate: No definite answer but possibly sometime in September of 1995

Did I Know Anything Going In?: We’ve talked about it previously on the podcast and I think I may have seen a random episode or two back in the day on the local UPN affiliate.

WMAC Masters is a wonderfully insane mash-up of professional wrestling, Mortal Kombat, Power Rangers, American Gladiators and like a dash of Medieval Times.  Filmed on location at Universal Studios Florida, the show was a convoluted martial arts tournament that threw a bunch of actual, fantastic martial artists together to compete for the Dragon Star, the WMAC (or World Martial Arts Council) equivalent of the WWE championship.  Before they had a shot at the Dragon Star though, each fighter had to defeat all the other masters and gain their “Ki Symbol”, which represented their martial arts discipline of choice, to fill in their “Dragon Belt” and only when they had all the symbols could they challenge the champ.  The crazy part of the first episode is that the show treats all this like it’s common knowledge like WMAC Masters is as common as baseball or football to the average viewer. It also feels like this the tenth episode of the show and not the first; the tournament is well under way and some of the fighters have seemingly already won 8 or 9 fights that we as the audience have never and will never see.  At least the first episode tries to introduce most of the main fighters, focusing mostly on Hakim “The Machine” Alston, who did stunts and appeared in Mortal Kombat and…Shootfighter(?).  Hakim relates the story of how he got his nickname, which doubles as the episode’s life lesson about maintaining discipline, where he became too angry when he was training in kickboxing and forced one of his fellow fighters into a bare knuckle, off hours fight that left him with a broken leg and a month long hospital stay.  Every episode tried to impart some sort of life lesson to the kids watching, mostly about respect or believing in yourself and usually implying that martial arts is the answer to overcoming any sort of difficulty.

Outside the cheesy, scripted backstage banter, the main format of the show, at least for the first season, is that four fighters would battle it out and the winners would face each other in a final showdown.  As we’ve already established though, nothing is straightforward on WMAC Masters and the combatants first had to enter “Battlezones” and fight waves of faceless kabuki warriors, ninjas or other generic martial arts hordes and then, after some random amount of time, the fighters would face each other.  In a blatant nod to their fighting game inspiration, each fighter had a “power gauge” that would go down if they were hit.  The final battle put both fighters into the “Battledome” but, again, it wasn’t a straightforward fight and instead they had to knock their opponent into the “electrified” walls of the cage to earn points, the fighter with the most points at the end of 2 minutes being declared the winner.  Hakim and Ho-Sung “Superstar” Pak aka Liu effing Kang from Mortal Kombat battle it out for the final battle, with Superstar eventually ending up the victor.  All of the action is commented on by Shannon Lee, the daughter of Bruce Lee and brother to Brandon, but she’s not exactly the most dynamic play by play announcer and she would only be on the show for the first season and during the second season, the show got even more crazy and leaned harder into the fantasy/Mortal Kombatness of the premise.

WMAC Masters was cancelled after two seasons but it did get action figures, books and VHS releases of episodes.  It actually came back after it’s cancellation in 1996 in 2002 as it aired as part of 4Kids Entertainment’s Saturday morning lineup and was also on The CW’s website streaming until 2003, when 4Kids went bankrupt and it’s not available anywhere online except for the above Youtube rip and it’s also never been on DVD.  Based on the disturbingly detailed Wikipedia page, there seems to be at least some dedicated fans out there and it’s as wonderfully cheesy as the various Saban series that were being put out around the same time.