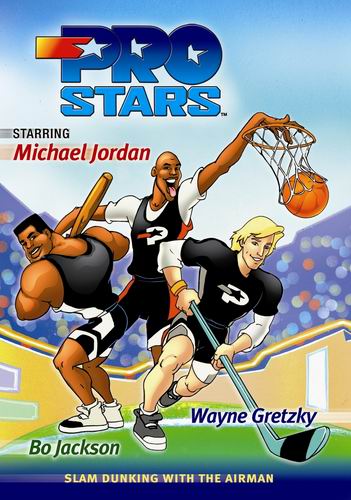 Looking back on the 90’s, there was definitely a different vibe as far as sports go.  Sports Illustrated for Kids was one of the coolest magazines you could read, GUTS was proving who the greatest kid athletes in the world were and superstars like Michael Jordan, Bo Jackson and Wayne Gretzky could literally become Saturday morning superheroes.

Did I Know Anything Going In?: I’ve seen the intro a bunch of times and knew the general premise, but never saw a full episode.

In the grand tradition of Chuck Norris and Mr. T, the trio Michael Jordan, Wayne Gretzky and Bo Jackson form the ProStars (although they lose points for not actually voicing their animated counterparts).  Originally planned to air on ESPN, ProStars eventually wound up at NBC for a season of positive messages, helping kids and participating in extremely awkward live action segments.  Although he signed off on it, Michael must have been too busy to participate, as only Bo and Wayne appear in the live action segments that bookend the episode.  The segments tease what the episode will be about and also has kids ask the superstars questions that they barely have time to answer before the insanely 90s editing kicks in, throwing stuff like the word “Seriously?!” 20 times across the screen.  Wayne seems very uncomfortable but sincere while Bo definitely carries the live action segments with his energy and enthusiasm.  The trio was chosen because the represented the pinnacle of America’s four main sports in the 90’s (sorry soccer fans) with Mike obviously representing basketball, Wayne representing hockey and Bo pulling double duty for football and baseball (since Bo Knows both).

Getting to the actual plot of the episode, the ProStars recieve VHS tapes from kids in trouble and then head out to help after hearing what’s going on, it’s all very Mike Tyson Mysteries except completely sincere and unironic.  The animated versions of the trio are voiced by Dorian Harewood, Dave Fennoy and Townsend Coleman and it’s all solid, distinctly 90’s voice acting and the guys are exaggerated versions of themselves where Mike is the team leader and incredibly intelligent, recognizing complex technology instantly while Bo is the muscle and Wayne is the comic relief who inexplicably is always hungry.  The trio operates out of “Mom’s Gym” where “Mom” is an extremely stereotypical Jewish stereotype that provides the guys with gadgets based on their sports of choice and is almost literally Mrs. Junko from Toxic Crusaders, even being voiced by the same actress, Susan Silo.  Mom is assisted by Denise, voiced by Diana Barrows, and the pair have made things like multiple flying vehicles for the guys, boomerang hockey pucks, inflatible basketball parachutes, a baseball bat that shoots balls and contains a grappling hook and laser torch and so much more. The show never explains any background info about the ProStars.  Like, are they still superstar athletes in the animated world or just vigilante superheroes?  If they are just starting out with their mission to rescue kids, how do they already have established villains?  Anyway, after gearing up, the guys head to the Museum of American Sports to help Jimmy, whose father has disappeared, which Jimmy believes is because his father now hates him for quitting little league.  The guys explore the museum and are attacked by the displays which have somehow sprung to life and the guys realize it’s their old/new nemesis, Clockwork Delaronge, who has some sort of unspecified grudge against the MLB and wants to kidnap the “Commissioner of Baseball” to charge a ransom amount that will bankrupt the league.  The guys battle things like statues, sharks, bears and a golem made of sports equipment and battle Delaronge, who is operating a giant statue of Babe Ruth.  Using all their gadgets and sports skills, the guys rescue the Commissioner, Jimmy and Jimmy’s dad, saving baseball but Delaronge, who promises to make his return and get revenge.

ProStars lasted for one 13 episode season before being cancelled.  The show doesn’t seem to have a lot of merchandise around it, there are some VHS tapes of episodes along with a single DVD release that seems like it’s maybe one episode(?).  There was also a comic adaptation of one of the episode that was part of a Toys R Us (RIP) giveaway promoting NBC’s 1991 Saturday Morning lineup and Wayne was featured on a cereal that was called “Pro Stars” but that debuted seven years before the cartoon:

ProStars is a wonderfully cheesy cartoon that should definitely be checked out at least once.  It would have been even more insane if the guys had actually voiced their animated versions but the brief live action segments are deliciously awkward and the whole show has all the stylistic craziness of the 90’s, with quick cut editing and randomly colored words just flashing randomly across the screen and it really captures the difference in sports culture of the early 90s compared to today, where the three biggest athletes on the planet could be seen as literal superheroes.  Most of the episodes seem to be available on Youtube if you want to check it out.