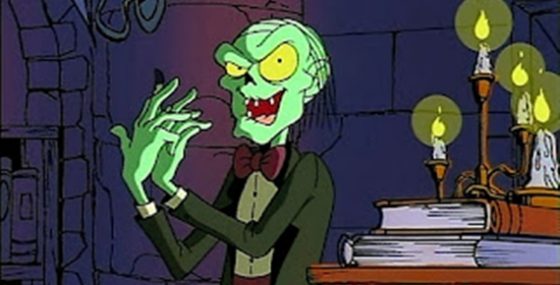 In the grand tradition of fellow R rated (or TV-MA as the case might be) properties like Rambo, Police Academy and Robocop, the insane popularity of HBO’s Tales from the Crypt, and particularly John Kassir’s Cryptkeeper, resulted in a landslide of kid focused Tales merch, like toys, comics and books, and an animated series on ABC (and later CBS) that put a kid friendly spin on the stories told by it’s violent and sexy older sibling.

Episode Title: When the Cat’s Away

Did I Know Anything Going In?: I think I may have seen some episodes as they aired but I’ve definitely seen more of OG Tales from the Crypt and also the weird game show spin-off, Secrets of the Cryptkeeper’s Haunted House.

Airing at the same time as Tales from the Crypt’s fifth season, Tales from the Cryptkeeper followed the same basic format as it was an anthology horror show that featured bookend intros and outros by The Cryptkeeper, voiced as always by the great John Kassir.  The Cryptkeeper comes to animation pretty much the same as his live action version, although a little more friendly but still with plenty of awful/great puns.  CK introduces this episode while he’s getting ready to go on vacation, trying to decide between destinations like New Yuck City and Carlsbat Caverns and the episode’s creepy tale involves brothers Dwight and Stu, who are obsessed with getting a high tech dirt bike, having constant fantasies about ripping across the desert.  Their father owns a crappy travel agency and they overhear that an insanely rich client is leaving to go to Transylvania and they decide to break into his house while he’s away and steal something valuable to get the funds for the dirtbike.  Well, older brother Stu decides this and younger brother Dwight fearfully tags along.  The house is a spooky old, classic haunted house and the brothers run into all the classic complications, like deathtraps, revolving bookcases, hidden passages and a murderer’s row of monsters including a werewolf named Fifi, a Frankenstein monster, vampires, a giant squid-like monster and an army of zombies.  One of the best things about Tales from the Cryptkeeper is that even though it’s toned down tremendously from the HBO series, it still has an edge and the monsters feel dangerous and likely to rip the brothers limb from limb if they get caught.  There’s quite a lot of repetition that drags down this first episode somewhat though, with lots of scenes of the brothers split up and just yelling each other’s names and the voice acting for the brothers is not the greatest.  The show has a fun comic book style look and it seems like it’s trying to possibly evoke the old EC comics that inspires it.

Eventually the brothers find a map and, after surviving multiple encounters with the various creatures of the house, they find a room marked by an X and find a treasure chest but it only contains an issue of Tales from the Crypt with a cover of them being attacked by zombies, who are rising out of the ground right behind them.  A hidden wall opens up and the brothers are able to escape, rushing past the house’s returning owner…The Cryptkeeper.  The timing doesn’t make any sense whatsoever (Were Dwight and Stu stuck in the house for days/weeks?) but it is fun that the Cryptkeeper is an actual character in the universe and, as far as I know, I don’t think he ever interacted with any of the characters of the stories from the HBO show and there’s some fourth wall business as well as there’s an audience who mostly boo when, for instance, CK tries to show some vacation slides.

Tales from the Cryptkeeper lasted for two seasons on ABC and then was cancelled but was revived in 1999 as New Tales from the Cryptkeeper with a different animation style and aired on CBS (which had aired the previously mentioned Tales from the Crypt gameshow in 1996-1997).  During season 2, The Cryptkeeper feuded with his fellow EC Comics hosts, The Old Witch and The Vault Keeper, both of whom were mad that they didn’t have their show and would try to take over this one from CK.  Obviously the HBO series is superior with it’s high profile directors, guest stars and ability to go full blown with sex and gore but Tales from the Cryptkeeper actually translates the show shockingly well to a Saturday morning kid audience.  The comics and HBO show already featured heavy handed morality lessons, so that gave built in lessons to teach the kids watching and John Kassir’s Cryptkeeper barely loses anything coming over to animation.  The entire series is over on our old friend Tubi TV but it’s also on the YTV Direct Youtube channel. 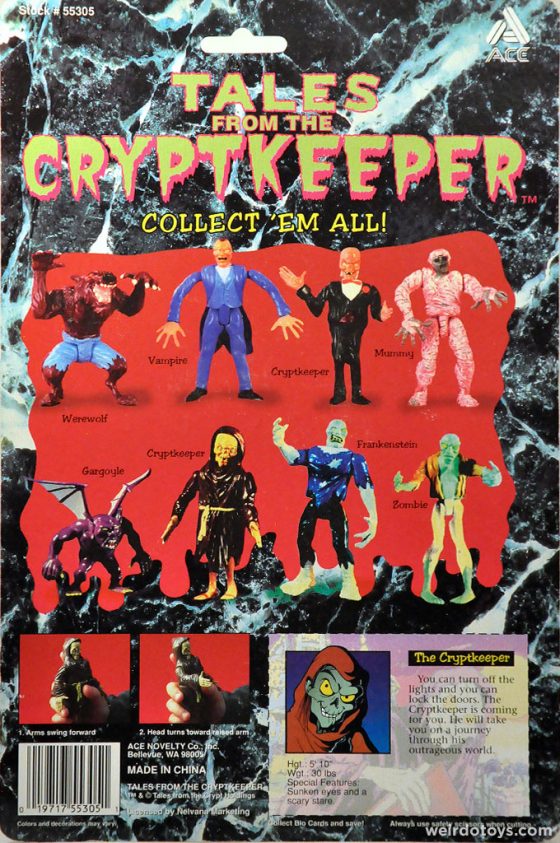