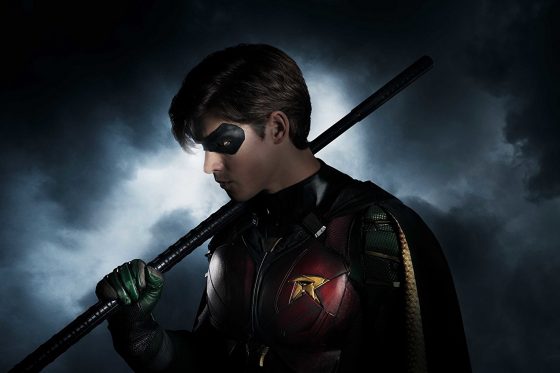 One of the first things announced as an exclusive selling point of the upcoming DC Universe streaming service, we finally have our first look at the new, live-action Titans series.  The Teen Titans have been all over in various forms, especially in recent years from DC Animated movies to the cutesy antics of Teen Titans Go but this is the gritty and edgy take, seemingly trying to slot itself as the equivalent of Netflix The Punisher or Daredevil compared to the Arrowverse with a TV-MA rating and things like Dick Grayson (Brenton Thwaites) saying stuff like, “Fuck Batman” before beating up some thugs.  Greg Berlanti is producing along with Geoff Johns and..sigh…Akiva Goldsman and it’s co-starring Teagan Croft as Raven, Anna Diop as Starfire, Ryan Potter as Beast Boy, Alan Ritchson as Hawk and Minka Kelly as Dove.  Titans is going to lead into the DC Universe’s original Doom Patrol series, so those characters are going to show up at some point as well.  I think personally this show is trying a little too hard to be “mature”, especially that aforementioned line and trying to emphasize how violent it is but I also appreciate that they are willing to go full TV-MA and it hopefully bodes well for when we get something that can fully utilize that freedom, like the upcoming Swamp Thing series.  Check out the first trailer for Titans below.