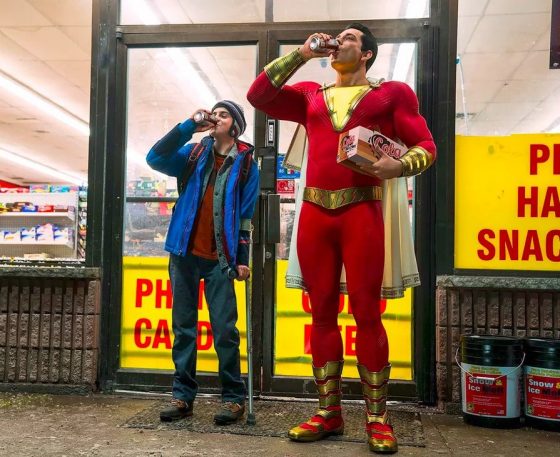 One of the biggest complaints about the DC Extended Universe is that it’s too dark and serious (which the new Titans series is leaning extremely hard into) but things are going to get much more colorful and wacky next spring with the movie debut of Shazam.  Asher Angel stars as Billy Batson, an orphan who gets put into foster care but luckily bonds with his new foster brother Freddy (Jack Dylan Grazer), who is obsessed with heroes like Superman and Batman.  After he stands up to some bullies at school who are hassling Freddy, Billy is chosen by an ancient wizard, Shazam (Djimon Hounsou), who transfers his fantastical powers to Billy.  Saying “Shazam!”, Billy can now transform in an adult, extremely powerful version of himself, played by Zachary Levi.  While Billy and Freddy try to figure out what Billy’s new powers are and just generally have fun goofing off, the evil Dr. Sivana (Mark Strong) is lurking in the background and will put Billy’s new powers to the test.  Although we weren’t really sure what to think based on the promo pictures, like the one above, this movie seems like it will be pretty fun, sort of a comedic version of Chronicle at times.  David F. Sandberg, who previously directed horror films like Lights Out and Annabelle: Creation, is directing and the movie arrives on April 5 next year, check out the trailer below.