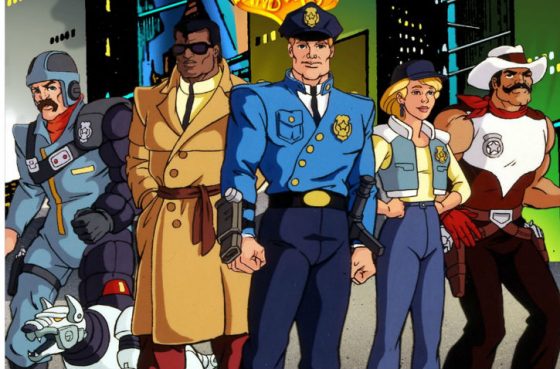 Not to be confused with the long-running Fox reality show, C.O.P.S. was an animated series from DIC that aired 65 episodes starting in 1988.

Episode Title: The Case of the Stuck-Up Blimp

Did I Know Anything Going In?: I’ve seen the intro before and I was aware of the toyline that went with the series but never saw a full episode of it.

COPS or the Central Organization of Police Specialists was a special high tech law enforcement task force created to help save Empire City from the rampant crime of crimelord Brandon “Big Boss” Babel, who the regular Empire City PD was ill-equipped to deal with.  The federal government sends FBI Agent Baldwin “Bulletproof” Vess to lead the COPS and he fills out his team with a group of colorful characters who each have a very specific specialty and usually some sort of high tech gadget or cybernetic enhancement to assist them. Bulletproof himself had his entire torso replaced by a cybernetic version that lets him truly live up to his nickname and gives him compartments that hold other gadgets, like explosives.  Bulletproof is voiced by Ken Ryan and is possibly one of the coolest characters in cartoon history.  He’s never not wearing sunglasses and Ryan’s deep booming voice is so distinctive, it’s almost like if someone like Don LaFontaine was voicing the main character of a cartoon.

The main case of this first episode of COPS is that a fancy new blimp has arrived on a publicity stop in Empire City and Bulletproof and a rookie member of COPS codenamed Hardtop are invited to a gala event onboard.  Big Boss sees this as the perfect opportunity for a heist and has his henchmen Crusher, Berserko, and Turbo Tu-Tone plan to sneak on board as guests, which they first have to steal tuxes for.  Nevermind that all of Big Boss’ henchmen are all extremely grotesque and recognizable so they probably shouldn’t even be able to walk down the street without getting noticed.  At this point, I should also mention that Big Boss is firmly in the “Dr. Claw” area of villainy, which makes sense as DIC also produced that show.  He has a cybernetic metal hand and a pet weasel named Scratch that also has cybernetic implants.  Anyway, Hardtop just happens to be getting his tux for the gala at the same time as the bad guys rob it and he gives chase but loses them do his fear of heights when the chase goes to the roof but the bad guys lose their ill-gotten suits.  Their new plan is to kidnap a catering crew and sneak aboard that way.

Bulletproof and Hardtop arrive at the gala, where Hardtop is trying to work up the courage to talk to his crush, hard-hitting reporter Whitney Morgan, who has a crew of robots to film and do makeup for her including a camera that seems to talk with maybe a Brooklyn accent?  Big Boss’s crew attacks and the COPS spring into action to try and stop them but get overwhelmed and locked in the freezer.  Bulletproof manages to use one of his explosives to open the door and they manage to call for backup.  Bulletproof goes after Crusher, who is trying to destroy the rigging of the blimp with his jackhammer while Hardtop goes to make sure the other COPS can get on-board when they arrive but his fear of heights paralyzes him again.  He’s finally able to push past it and the COPS battle the heist crew, Hardtop rescues Whitney before she falls off the blimp and Beserko, being a giant moron, takes the wrong bag in his escape and winds up with a bunch of tiny sandwiches and other appetizers instead of the actual loot.

COPS is still a fun show that feels sort of like a kid-friendly cheesy 80’s action movie and there’s plenty of cool gadgets and distinctive personalities to keep things interesting.  The “facing your fears” lesson is obviously there to try and make the show seem slightly education but it fits much more naturally into the actual plot of the episode than other shows we’ve watched for Auto Pilot and the art style still looks pretty good as well, it holds up to the same if not better than other DIC shows.  The intro is also fantastic and bad-ass and the music throughout has a cool 80’s crime movie vibe.  The main driving force for the show, of course, was the toyline, which ran the same amount of the time and was produced by Hasbro using most of their tricks from GI Joe, including profiles for each COP or Crook on the back of the card (written by GI Joe’s Larry Hama) and there was also a comic from DC.  Shout Factory! put out two volumes of DVDs containing the episodes of the series and last year Mill Creek Entertainment put out a Complete Series DVD set but there also seems to be a ton of episodes in full on YouTube if you want to check out some there.