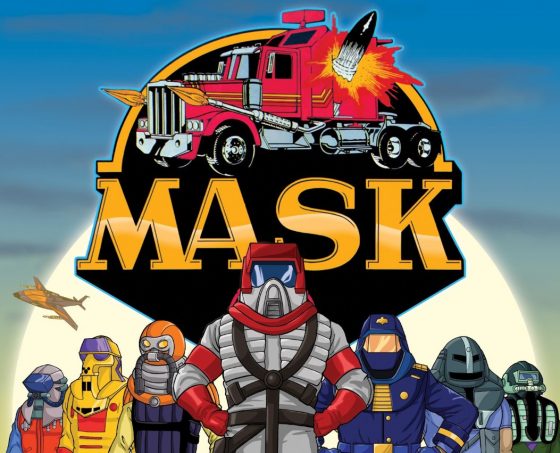 Arriving in 1985, M.A.S.K or Mobile Armored Strike Kommand was a multimedia blitz of action figures, comics, video games and the animated series, which ran for two seasons.

Did I Know Anything Going In?: I’ve seen the opening many times and knew the concept of vehicles that transform into other vehicles and some characters like Matt Trakker and Miles Mayhem.

If there are tiers of 80’s cartoons, stuff like Transformers, GI Joe, Thundercats, and He-Man are at the top but just below is stuff like MASK, which is still fondly remembered by many.  The main concept of the toy line and series is that billionaire Matt Trakker created his own task force called MASK, utilizing a series of high tech helmets and transforming vehicles to battle the evil forces of VENOM or Vicious Evil Network of Mayhem, led by the evil Miles Mayhem.  In backstory that is not revealed in this first episode, Mayhem actually worked with Trakker and his brother on developing the technology both sides use but a falling out led Mayhem to go the way of evil.

This first episode finds a mysterious and powerful meteorite crashing to Earth.  Professor Stevens, the lead scientist investigating the meteor, believes she can use its power to heal any disease and save countless lives but the meteor is stolen by VENOM in a fake UFO.  Professor Stevens tries to flee from VENOM agent Wrecker but ends up driving off a cliff into a river and VENOM believes she is killed.  Mayhem cuts open the meteor, revealing it’s opposing destructive powers and is looking to sell it to three different buyers.  Professor Stevens survived her fall and was rescued by Matt Trakker, who reveals that he runs MASK and vows to get the meteor pieces back.  Matt assembles a strike team from his group of specialists including Bruce Sato and Alex Sector, who pilot the big rig Rhino, Dusty Hayes, who pilots the jeep Gator, Brad Turner who pilots the motorcycle Condor and Hondo MacLean, who pilots the pickup truck Firecracker.  Matt himself pilots Thunderhawk, a Camaro that can transform into a jet.  Matt’s insanely annoying son Scott and his equally annoying robot sidekick T-bob stowaway on Firecracker because they want to help with the mission but they just end up getting Hondo critically injured in the first big battle between MASK and VENOM when Hondo has to shield him from a missile blast from Mayhem’s helicopter/jet Switchblade.  VENOM gets away as the team sees to Hondo and they have to get the pieces back to heal him.  The group splits up and manages to get two of the three pieces back by intercepting the arms sales and using their vehicles and mask’s special abilities.  Trakker tries to intercept the final piece but is intercepted by Mayhem and loses the final piece during their dogfight.  Luckily though, Scott has somehow Jar-Jar Binksed his way into stealing the truck with the final piece and they are able to heal Hondo but the meteor seems to have lost all its power.

I’m going, to be honest here, I did not grow up with MASK so I don’t really have a nostalgia for it and, because of that, this first episode was kind of rough to get through.  The concept is awesome, as are the vehicles, especially Mayhem’s Switchblade, and it has, without a doubt, one of the greatest theme songs ever but the voice acting is pretty rough and Scott Trakker is easily one of the worst characters in cartoon history.  Still, MASK has maintained a place in pop culture over the last few decades, with MASK showing up in IDW’s massive Hasbro crossover comic and it’s getting a blockbuster live-action movie from Fate of the Furious director F. Gary Gray.  Shout Factory also put out a “Complete Series” set but due to some strange licencing, the 10 episodes of Season 2 are not included.