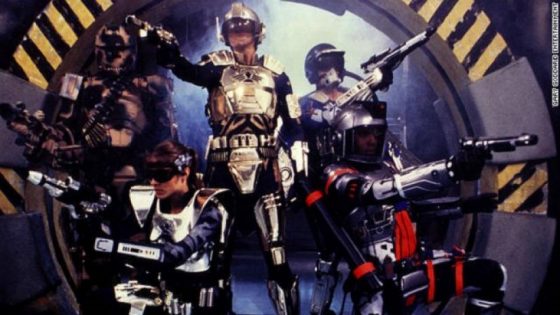 Debuting in 1987, Captain Power was highly ambitious on all fronts but ultimately only lasted one season in syndication.

Did I Know Anything Going In?: I’d heard of Captain Power, seen the intro and knew about the toy gimmick where the toys interacted with the show but never saw any episodes.

Created by Landmark Entertainment with a toy line developed by Mattel, Captain Power and the Soldiers of the Future arrived in the fall of 1987 and ran for 22 episodes until spring of 1988.  J. Michael Straczynski, comic legend and creator of Babylon 5 and most recently co-created Sense8 with the Wachowskis, was the de facto showrunner and head writer of the series and, much like when he worked on The Real Ghostbusters, didn’t compromise or dumb things down just because it was targetted to kids.  The world of Captain Power is insanely bleak and dark as it’s 2157 and humanity lost the “Metal Wars” and robots led by the evil Lord Dredd (David Hemblen) have taken over the planet.  Jonathan Power (Tim Dunigan) leads a small resistance team that includes aerial fighter Hawk (Peter MacNeill), ground assault specialist Tank (Sven-Ole Thorsen), espionage expert Scout (Maurice Dean Wint) and tactical and transport expert Pilot (Jessica Steen).  The entire team is able to wield the Power Suits, specially armored exoskeletons that give them enhanced abilities and weapons.  Although it’s not really dived into in this first episode, there’s a rich backstory about how everything came to be but it’s basically a Skynet sort of situation.

This first episode of the show kicks off with a fantastic action sequence as Power and his team take down a power station, delaying Dredd’s “Project New Order” and he takes action by luring Power into a trap in the ruins of San Fransisco.  Athena, his father’s research assistant and love interest of Power, sends a distress signal and, when Power answers, she tries to kill him.  Athena had been fighting in the human resistance but was “Digitized”, which is a horrific looking torture where Soaron, Dredd’s flying robotic commander, painfully turns a person into digital data and puts them into OverMind, the Skynet equivalent, where their will is broken as OverMind reads and turns all their thoughts and fears against them.  Power survives Athena’s attack and tries to convince her to come with him but Soaron attacks and wounds Athena, who begs Power to let her stay and die.  The rest of the team arrives and manages to beat back Soaron and Athena is brought back to the Soldiers of the Future HQ and safety.  The show must have been expensive to produce because it’s clear this wasn’t just trying to be some toy commercial cash in.  The acting is great, the costumes and sets looking amazing and there’s even a full orchestral score that is very reminiscent of Star Wars.  There’s also the whole “interacting with toys” gimmick where, if you bought Captain Power vehicles, during the show or on special VHS tapes, your toy could “shoot” at the screen and score points but the show could also shoot back and your vehicle could gain enough damage to explode and eject off the shooting mechanism.  The way this worked was sort of similar to how light guns of the era like the Nintendo Zapper worked and you could also shoot between toys similar to Laser Tag.  I’m not sure if the battle with Soaron that closes out this episode had any interactive bits but it’s clear the credits sequence does, as there are blatant flashing targets to be shot and obstacles to avoid.

What ultimately undid the show though was that parents complained about the violence and mature themes of the show effecting their children while the adult fans who probably would have fully embraced the serialized storytelling and complex narrative ignored it because of it’s kidding sounding name and assumed it was just a cheap cash grab.  It’s maintained a cult following and in 2016 there was an annoucement that a reboot was in development that would update the show and continue the story 15 years after the first season ended but besides a brief teaser trailer, nothing has been seen or heard since.  The complete original series is available on DVD or, as you can see above, there are episodes in full on YouTube if you want to check it out.