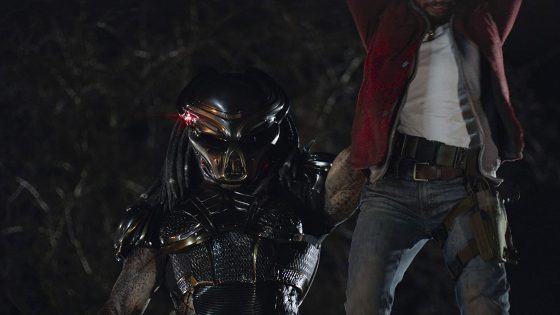 The last time we saw anything Predator related was in 2010’s Predators from Robert Rodriguez, which transported unlikely action hero Adrian Brody and a slew of other mercenaries to the Predator homeworld for a hunt on their turf.  The action is back on Earth for the latest entry in the series, The Predator, from writer/director Shane Black, who is uniquely qualified having co-starred in the original Predator. The Predator is definitely better than either of the Aliens vs Predator movies but it’s probably the weakest entry in the series so far.

The plot of The Predator is bizarrely complicated, especially as it goes on, but basically a rogue Predator crash lands on Earth carrying something that could be of great use to humanity but a Super Predator, who has been genetically modified and upgraded, also arrives looking to recover it and kill anyone and anything in its way.  Stuck between the two warring aliens is a ragtag team of ex-soldiers on their way to a mental hospital, including sniper Quinn McKenna (Boyd Holbrook), who found a crashed Predator pod and stole a mask and wrist gauntlet before barely escaping when the Predator attacks and kills two of his men. Quinn mails the tech to himself but his PO box has been closed due to nonpayment and the package arrives at the home of his son Rory (Jacob Tremblay), who is able to decipher and activate the tech and draws both Predators to his suburban town.  Things get even more complicated with black ops government groups and shifting alliances and it feels like the movie is just trying out different plot ideas every 20 minutes or so and deciding it’s not working and then moving on to something else. The goals of each group keep shifting until the movie just sort of ends on a cliffhanger that will probably never be resolved. The baffling thing is that the movie is bookended by two pretty great ideas for a Predator sequel. One is the idea of an Army Ranger/special ops soldier taking on a Predator with borrowed Predator tech in the jungle and the other is the aforementioned sequel tease that features another bit of awesome Predator tech.  What’s between those two ideas though is either generic or not given any time to develop into something interesting.

Another weird aspect of The Predator is that it feels like every character is Shane Black, specifically Hawkins from Predator. They all talk exactly the same way and it’s like an entire team of comic relief sidekicks with Boyd Holbrook being the only slightly serious one.  Put another way, it’s like if the A-Team was made up of entirely half a dozen versions of Murdock. Even Olivia Munn talks and acts just like all the guys.  I’m also not entirely sure what Sterling K. Brown was going for as the evil head of Project: Stargazer, the evil government group trying to study Predators in secret and killing anyone who may leak the information.  He ends every sentence with a really bizarre laugh and just feels like he had ideas for some character quirks that don’t quite gel. The movie seems really lacking in the dialogue department. Shane Black’s trademark is always smart and funny with a great handle on vulgarity but here it feels like a kid who just learned about f-bombs and uses it in every sentence.  With the exception of maybe one or two clever one-liners, the movie leans on the crutch of just inserting f-bombs into basically every line of dialogue in the bluntest and least artful way possible.

Action wise, the movie is fine.  There are a few new and clever gadgets, including the Super Predator basically having Scorpion from Mortal Kombat’s harpoon and some new insights into how the Predator masks and gauntlets work and there are Predator hunting dogs brought in by the Super Predator as well, although that goes in an extremely weird and bizarre direction.  There’s also a pretty cool set-piece involving the Predator ship’s shield as Quinn has to jump onto one at one point and the Predator kills are decently cool and brutal overall. The movie is set mainly at night, so it is hard to tell what exactly is happening at some points. It’s not quite as bad as AvP: Requiem, where the movie was almost pitch black for 80% of its runtime, but it still would have been nice for some more daytime/brighter action.

The Predator is not terrible but it’s definitely the weakest non-AvP entry in the Predator franchise.  It feels like a stew of a bunch of different ideas and the movie jumps around like it has ADD, abandoning plots and shifting goals constantly.  The characters and writing are also not up to the usual standards set by previous Shane Black classics like Kiss Kiss Bang Bang or The Nice Guys.  It might be worth a watch as a rental or via streaming but you definitely don’t need to rush out to the theater to see it.