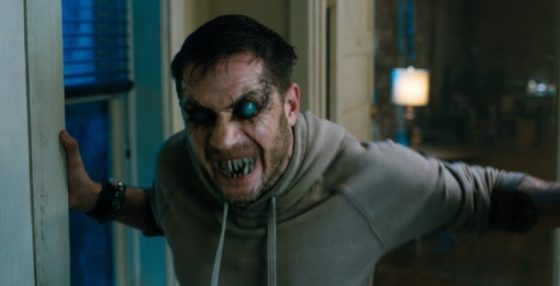 Released only a week or so before the movie on Eminem’s latest album, Kamikaze, Venom is an official tie-in song to the movie of the same name that just wrecked at the box office with the biggest October opening of all time (more on that later today in Battle at the Box Office).  The song seems to place Eminem into the role of Eddie Brock and pushes his lyrical skills to the limit as he tries to come up with things that rhyme with symbiote.  The official music video dropped on Friday last week, the same day as the movie, but, unfortunately, it doesn’t feature Slim Shady going full on Venom, except for a split second at the end, and instead seems to misunderstand the entire concept of the character.  The video features what seems like a symbiote-infected CD (side note: Does Eminem think people still listen to CDs?) that passes a rapping based infection between different people throughout a city.  There’s not even a Tom Hardy cameo or clips from the movie but you can still check it out below.

The Symbiote Remains Unseen in the first Venom Trailer