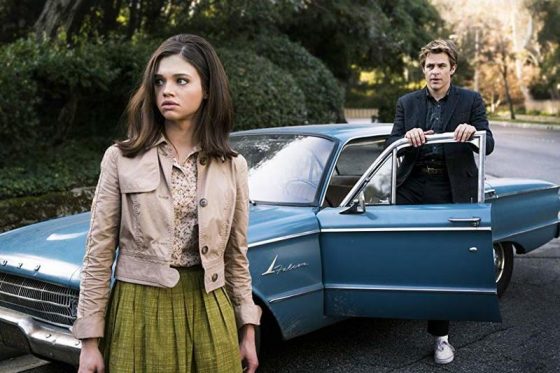 Last year TNT dove into Victorian crime with The Alienist and now the network jumps forward in time to 1960’s era Los Angeles for the new true crime drama from Patty Jenkins and Sam Sheridan, I Am the Night.

Based on the true crime memoir of Fauna Hodel, One Day She’ll Darken: The Mysterious Beginnings of Fauna Hodel, I Am the Night stars India Eisley as Fauna Hodel, who learns that her entire life has been a lie and she journeys to Los Angeles to try and uncover the truth about her past and her family.  Chris Pine co-stars as Jay Sheridan, a disgraced reporter whose career was destroyed when he reported on a disturbing crime against famed gynecologist Dr. George Hodel (Jefferson Mays) against his daughter Tamar but his powerful influence got the cast dismissed.  Working as a stringer for any paper that will pay, Jay gets obsessed with Hodel again when new information comes up after he’s assigned to a murder case.  Jay and Fauna’s investigations eventually intersect and they start to uncover the sinister and disturbing secrets of the Hodel family.  I Am the Night is a fairly slow burn, especially in the first half of it’s six episode season.  That doesn’t mean it’s bad, far from it, but if you need instant gratification, you may need to look elsewhere.  There’s a lot of atmosphere building as Fauna and Jay travel around famous Los Angeles landmarks and connect the dots of their separate investigations but there’s usually at least 1 major revelation each episode and the back half really picks up when Jay and Fauna eventually team up.  Both India Eisley and Chris Pine are both fantastic.  Eisley’s Fauna shows a gradually building steely resolve to uncover the truth, no matter how horrific and she has a quiet intensity that occasionally boils over with some well earned anger.  Pine’s roguish charm is in full effect as Jay Sheridan but there’s a barely contained sweaty desperation mixed with manic energy from drugs and PTSD fueled anger that makes him a fascinating mess of a character.  Jefferson Mays delivers a fantastically creepy performance as Dr. Hodel and Connie Nielsen basically disappears into her role as the haughty Corinna Huntington, Dr. Hodel’s ex-wife who is one of Fauna’s main sources of info and also a member of the burdening avant garde art scene in LA.  The only performance that didn’t quite work for me is Golden Brooks as Jimmy Lee, Fauna’s adopted mother.  It’s a little too over the top and theatrical compared to the other performances and just feels more forced and it’s especially apparent when she is in scenes with India Eisley, who is much more subtle and natural with her acting.

On the visual side of things, I Am the Night does an incredible job of recreating 1960s Los Angeles and I would easily put it on the level of something like Mad Men as far as verisimilitude to the era in the clothing, cars and locations.  There are some stunning real locations featured in I Am the Night, including the imposing John Sowden House and Greystone Manor.  The only area of time period setting that I Am the Night lags on is music, there isn’t a lot of licensed music and what songs are featured don’t really have much impact, but that might just be a result of seeing Bad Times at the El Royale and playing Mafia III last year, both of which were brilliant in their soundtrack choices.  I Am the Night also doesn’t shy away from the societal issues of the time and both Fauna and Jay encounter different sides of it over the course of the show.  Having a Black adopted family, Fauna sees the ugly racial and social issues plaguing the city and Jay runs afoul of the incredibly corrupt police force, who essentially are hired muscle for whoever pays the most or has the most influence.

If you’re a fan true crime and noir, I Am the Night is definitely worth checking out.  Chris Pine and India Eisley are both incredible in the lead roles and, while it’s a bit of a slow burn at first, it really picks up in it’s back half and the ugly and sinister secrets that Fauna and Jay uncover are compelling and fascinating.  If you’re intrigued by the show and want some more insight into the actual events and past of the Hodel family, there’s also a companion podcast called Root of Evil: The True Story of the Hodel Family and the Black Dahlia that will be starting on Wednesday, January 30th and will feature the real Fauna’s daughters as they tell their family’s story along with other members of their family.