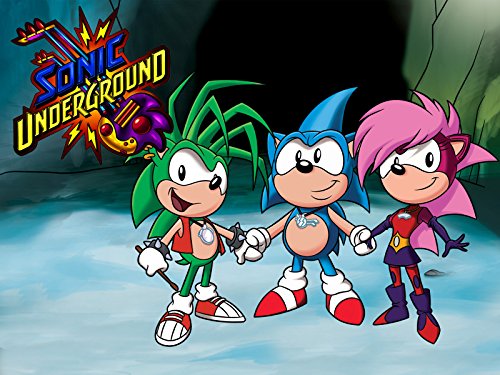 While the new Sonic movie sets its own path by bringing the blue speedster to live-action (or at least CG with live people) for the first time, back in 1999 there was another piece of Sonic media branching off into its own universe with Sonic Underground.  Conceived alongside the Dreamcast to hopefully help promote the new Sega console, Sonic Underground was not tied to any established continuity and the only link to the previous two animated shows was the return of voice actor Jaleel White.  White voiced Sonic but also voiced his new siblings Sonia and Manic and the story followed the siblings trying to find their mother, Queen Aleena, who was forced to separate the children when Dr. Robotnik took over her planet.  A prophecy says that the family will one day be reunited and stop Robotnik and the main thrust of the show (and the theme song) is the siblings’ quest to find their mother and foil whatever scheme Robotnik cooked up that week.  The Hedgehogs each had a special medallion that gave them a special power and was tied to a musical instrument, as they were also a rock group called Sonic Underground and each episode featured a new original song.  The show lasted for one season and 40 episodes and was part of a syndication package that included Extreme Dinosaurs, Mighty Max, King Arthur and the Knights of Justice and more.  You can check out the first episode, “Wedding Bell Blues”, below.