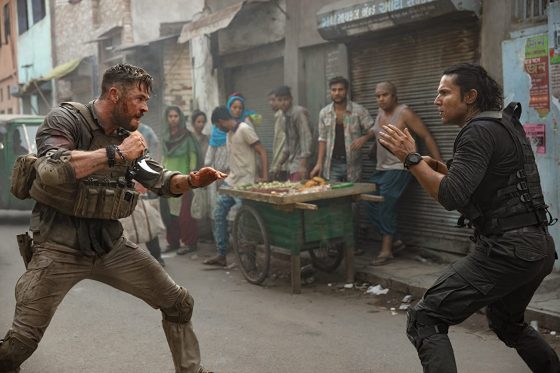 Seemingly taking cues from recent action classics like The Raid and John Wick, the latest Netflix Original Movie, Extraction, features awesomely brutal action sequences that are chained together with a serviceable but predictable plot.

Chris Hemsworth stars as black-ops mercenary Tyler Rake.  When the son of an Indian drug lord, Ovi Mahajan Jr. (Rudhraksh Jaiswal) is kidnapped by his rival in Bangladesh, Rake takes a job to rescue him but he and his team find they’ve been set up by Saju (Randeep Hooda), the man who hired them and a former special-ops soldier turned henchman for Ovi Mahajan Sr (Pankaj Tripathi).  As if that is not bad enough, the man behind the kidnapping, Amir Asif (Priyanshu Painyuli), controls the city of Dhaka and it’s police and military, so he locks down the city and cuts off any escape for Rake and Ovi.  The plot does a decent job of bridging the action sequences together but there’s a lot of cliches and story beats that you’ve most likely seen many times before in other, similar action movies.  For example, Rake has a dead son and a death wish but through protecting Ovi, he finds meaning in his life again, which is similar to stuff like Man on Fire.  There is a pretty interesting twist to the escalating conflict between Rake and Saju toward the third act but you’ll probably be two or three steps ahead of Extraction for most of the movie and you can probably even predict exact bits of dialogue.  Chris Hemsworth does a solid job as the stoic action hero and he really sells the action and the fighting prowess of Rake. Randeep Hooda gives a pretty interesting performance as Saju and gives him much more depth than the usual, just straight-up evil antagonist of this genre and Rudhraksh Jaiswal is also good as Ovi and is extremely likable, which helps to make you want to see him get out of the situation as unscathed as possible.

The real reason to watch Extraction is for the action sequences and it delivers big time in that department.  The action is incredible and definitely has the brutal realism of The Raid movies, like the first fight where Rake is rescuing Ovi and he takes out a room full of his kidnappers and at one point literally uses a rake and smashes a guy’s face into it.  There are also some amazing long take sequences, including a car chase and a fight/escape from a SWAT team.  Director Sam Hargrave definitely seems like he’s continuing the recent run of stunt coordinators turned directors like David Leitch and Chad Stahelski who deliver awesome action movies and I would definitely want to see more from him, maybe just with a better script.

If you’re into awesome, violent action, Extraction is definitely one to watch.  It doesn’t quite reach the heights of the true recent greats like The Raid or John Wick, mostly due to its cliche plot, but the action is top-notch and fantastic with some incredible fight sequences, car chases, and long-take tracking shots that should more than make it worth putting at the top of your Netflix queue.