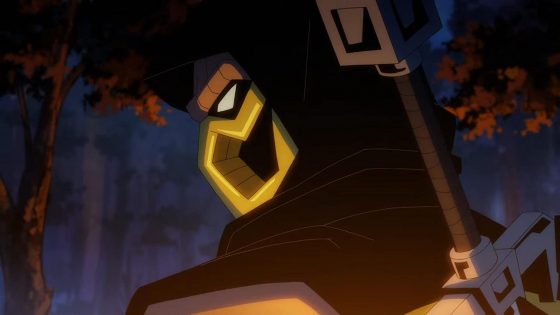 Mortal Kombat has been on the upswing since 2011’s Mortal Kombat 9 and the two excellent games that followed it and now they can add an excellent animated movie to their list of recent achievements with Mortal Kombat Legends: Scorpion’s Revenge.

The first (of hopefully many) R rated Mortal Kombat movies from WB Animation, Scorpion’s Revenge puts a new spin on the story of the original Mortal Kombat story with a Scorpioncentric focus as Hanzo Hasashi (Patrick Seitz) loses his family and his life after a brutal attack by the Lin Kuei and Sub-Zero (Steve Blum).  Accepting an offer from the nefarious Quan Chi (Darin De Paul), Hasashi returns to Earthrealm as Scorpion and enters the Mortal Kombat tournament on Shang Tsung’s (Artt Butler) island, where he is to retrieve an amulet that will bring back Quan Chi’s master, Shinnok.  While on the island, Scorpion encounters Earthrealm’s champions: Liu Kang (Jordan Rodrigues), Sonya Blade (Jennifer Carpenter,) and Johnny Cage (Joel McHale).  If you’re a long time MK fan or you saw the still wonderfully cheesy 1995 film, you know the basic plot beats but there’s lots of fun twists and new angles to keep things fresh, like the increased focus on Scorpion and some different match-ups than you’ve seen in previous versions of this story (Johnny vs Baraka, Sonya vs Reptile).  There are a few things that seem like a setup for another movie or are just weirdly rushed.  Kitana, for example, is barely in the movie, only showing up for an extremely brief fight with Liu Kang and Shang Tsung doesn’t really have that much to do either.  There are plenty of easter eggs and callbacks for MK fans though, including famous stages, like the Living Forest and the Pit, and the requisite catchphrases, like “Finish Him!” and “Get over Here!” (Weirdly though, I don’t recall anyone saying “Fatality”).

Another thing Scorpion’s Revenge nails is the absurd amount of violence the series is known for and it leans way into its R rating for every type of decapitation, evisceration, limb chopping, and vivisection you can imagine.  The movie also takes the “X-Ray Moves” concept that was introduced in Mortal Kombat 9 and puts its own spin on it, switching to a very stylish view of a skeleton/musculature whenever someone takes a particularly brutal hit.  All of the fight scenes, for the most part, are well animated and dynamic and it’s definitely not a phoned-in animation job like some of the more recent DC movies *cough* Killing Joke *cough*.  Another thing that makes it feel suitably MK is the voice cast.  Outside of Jennifer Carpenter and Joel McHale (both of whom are great, especially McHale who basically is Johnny Cage), the majority of the cast are MK vets as Patrick Seitz, Steve Blum, Grey Griffin, and Kevin Michael Richardson have voiced their characters in the recent Netherealm games or, in Richardson’s case, the 1995 movie as Goro.  Without a lot of flashy guest voices and reliably great voice acting veterans, you can really focus on the characters and the story.

If you’re an MK fan, Mortal Kombat Legends: Scorpion’s Revenge is a must-watch, not just because it’s the first R rated movie for the franchise but also because its an awesome and faithful adaptation of the series with enough new twists and details to make it not seem like a rehash.  Hopefully, this is the first of many movies under the Legends umbrella and that more of the classic MK stories get this treatment (they seem to be setting up a new spin on MK 2 in this movie).

Mortal Kombat Returns in August With Battle of the Realms (Trailer)