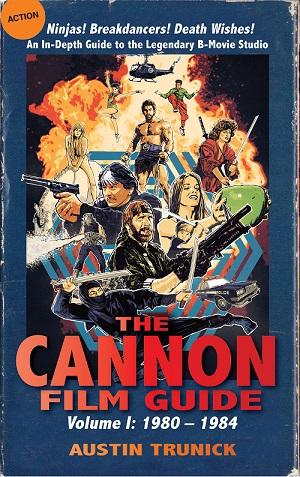 The Cannon Group is one of our most beloved purveyors of wonderfully over the top action from the likes of Charles Bronson and Chuck Norris (and later Stallone and Van Damme) but the house that Golan and Globus built had a much more diverse catalog and the truly excellent book The Cannon Film Guide Vol. 1 1980-1984 by Austin Trunick offers a must-read journey through all aspects of Cannon.

As the title suggests, Vol. 1 (of a planned trilogy) of The Cannon Film Guide explores all the major releases from The Cannon Group released between 1980 and 1984, which is when Israeli cousins Menahem Golan and Yoram Globus took over the company.  The book features a great mini-biography on Golan and Globus before diving into sections dedicated to each movie.  For movies like Death Wish II, Trunick also explores the other movies in the franchise, even if they weren’t released in the date range being explored and the book also doesn’t get into the really obscure movies that didn’t even have a VHS release and may have only played in very limited theaters.  There is an absolute treasure trove of information on each film and Trunick describes the plots with a great, tongue-in-cheek style that calls to mind similar writing from Nathan Rabin or Vern, author of the similarly excellent and exhaustive exploration of Steven Seagal, Seagalogy.  There’s also fascinating information about how each movie got into production and what the impact of each one was, not only with box office but on their directors and stars.  The book also has excellent interviews with many of the talent involved with the films, including actors like The Apple’s Catherine Mary Stuart and Michael “Boogaloo Shrimp” Chambers and directors like Sam Firstenberg and Luigi Cozzi.  There are also some fantastic pictures throughout the book as well, with items like VHS box art, posters, and pages from Cannon sales catalogs.  Trunick’s writing on each movie really lets you feel the excitement and fandom for the movies and really makes you want to seek them out, if only to see some of the insane scenes or sequences he describes in hilarious detail.

The entries for heavy hitters like Enter the Ninja, the Death Wish sequels, and the Breakin movies are fun and interesting reads but where The Cannon Film Guide truly shines is examining the more obscure movies in the Cannon…canon.  Outside of their beloved action movies, Cannon had their fingers in all sorts of pies, including teen sex comedies, horror, prestige drama, and erotica and it’s truly fascinating to learn more about movies like the boxing drama Body and Soul, which co-starred Muhammed Ali or the Bo Derek starring erotic drama Bolero.  If you saw Electric Boogaloo: The Wild Untold Story of Cannon Films and wanted to know more about the lesser-known films made by Cannon, The Cannon Film Guide is a godsend.

If you’re a fan of The Cannon Group or just B-movies in general, The Cannon Film Guide Vol. 1 is something you must check out.  Along with interesting trivia and information on more of their well-known movies, it also lets you learn more about all the other projects Cannon was up to outside the bread and butter that was their action movies and it really gives you a new perspective and insight into how crazy but also inventive and innovative Golan and Globus were, especially with recognizing and sometimes creating trends, like the ninja or breakdancing genres.  The book is available right now on Amazon.