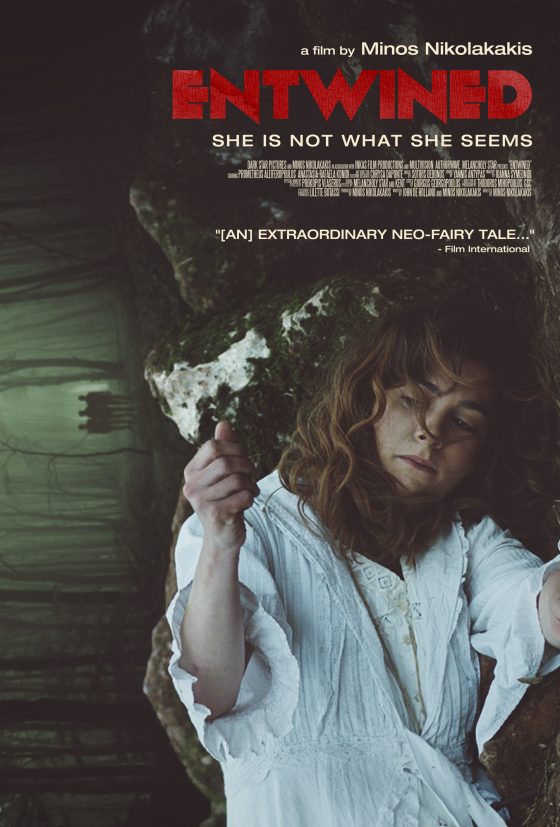 After the death of his father, Panos (Prometheus Aleifer), leaves a bustling city to offer his services in the remote village of Alyti. The village is small and quiet, offering little modern amenities. However, Panos quickly falls for Danae (Anastasia Rafaella Konidi), the village outcast living in the forest with a mysterious skin condition. Obsessed with finding a cure, Panos undercovers roots of Danae illness and the dark connection to the forest.

Entwined is an atmospheric and temper fantasy horror movie that calmly builds upon its minimalistic details. The plot moves at a slower pace, taking time for long shots of organic imaginary and broad dialogue. Entwined relies on simple backdrops and a tight cast list for its story. Panos introduction shows that he is a person of science, whose faith can be explained by what he thinks he knows, rather than feels. The contrast to his beliefs is Danae, a woman that believes in the raw power of natural order. Panos is easily entranced by Danae, despite some alerting issues to their relationship.

The fantasy aspects are highlighted while the horror is sparingly used. This doesn’t have any jump scares or bloody gore for cheap thrills. Instead, the horror comes from the eerie dialogue and ambiguous scenery to envelop a spooky mood. Yet, there are sequences that feel repeated, some that go over established narrative points, so the movie has a bit of a drag in the middle.

Anastasia Rafaella Konidi plays the bewitching Danae. She perfectly fits the role of a charming woodland woman. Konidi brings a lot of emotional depth when the tension peaks. While Prometheus Aleifer’s Panos is the relatable character, Konidi bears most of the hefty dramatic portions. Danae has sudden wild outbursts of joy or anger, adding more of an air of uncertainty to the plot.

At its core, Entwined is a cautionary fable about nature, mankind, and ultimately, love. Minos Nikolakakis and John De Holland wrote a solid plot structure that can transform the story into many different time periods. However, the slow-burning momentum of the story leaves a big void to get over when watching. It’s a compact indie flick that tries to wrap up too much at the end, but it can be a rewarding experience for some that enjoy the subtext.