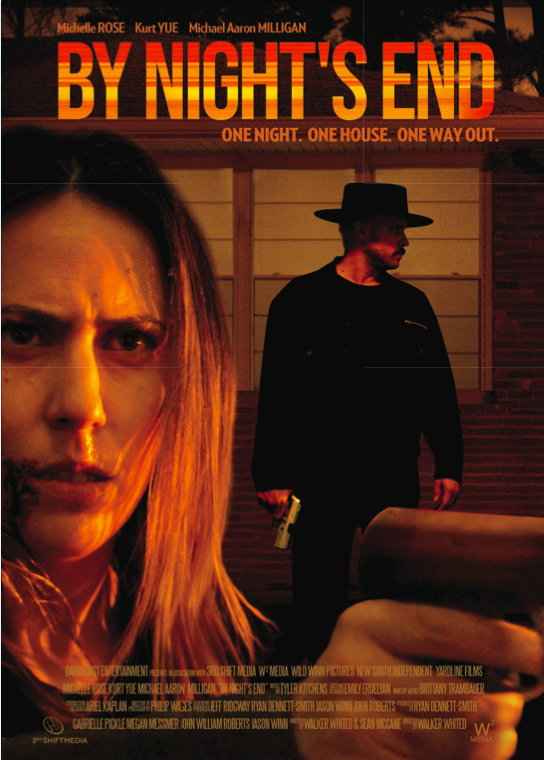 Out this week on digital platforms, By Night’s End is an effective and tense new thriller from director Walker Whited.

Michelle Rose and Karl Yue star as married couple Heather and Mark, who are in a rough place with tragic events in their past and current economic concerns.  When a man named Parker (Carlos Aviles) breaks into their home, Heather (who is a former Navy sergeant) kills him in self-defense but he seems to reveal there is money hidden somewhere in Heather and Mark’s house.  Faced with a moral dilemna, the couple decides to delay calling the police for an hour to search for the money but Parker’s associates, led by the threatingly charismatic Moody (Michael Aaron Milligan) arrive to complicate the situation.  The movie is fantastically paced with an ever increasing tension where the noose keeps tightening around Heather and Mark as their situation gets more and more desperate and deadly.  There’s not a lot of downtime but there is time for some excellent character moments where Heather and Mark deal with some emotional baggage they’ve been hiding or trying to repress.  One of my only major quibbles is with the initial decision of the couple.  As the movie goes on, the characters feel like they are acting very realistically to the situation but the initial decision to delay calling the police feels strangely pat and without concern from either character.  It’s just a strange turn to quick off the main plot of the movie but it’s fairly easy to get past and focus in on the growing danger.

The acting across the board is pretty great as well, especially Michelle Rose who is fantastic and able to play both her character’s more hardened combat side with a more emotional wife/mother side excellently and she gets to show off some of her stunt background for the exciting climax.  Karl Yue is great as well and Michael Aaron Milligan is a fantastic villain and one of those villains who is very talkative and deceptively friendly with his banter that hides his sinister intentions.  If you enjoyed movies like Phone Booth in the past, you’ll probably really enjoy By Night’s End.

If you’re looking for an effective and tense thriller, By Night’s End is definitely worth checking out.  It is excellently paced and will keep you engaged as the plot twists and turns toward an explosive finale and the acting all around is great as well.

(By Night’s End is out now on digital platforms like Amazon, iTunes, DirecTV, FlixFling, Google Play, Vudu and AT&T)