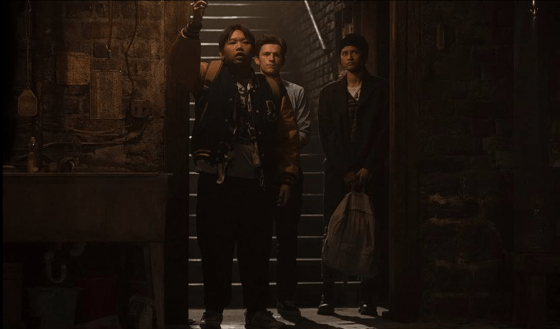 After seemingly endless speculation and casting news hyping the multiversal madness to come, we finally have our first official look at Spider-Man: No Way Home, which hits theaters in December.  Following the shocking finale of Far From Home, Peter Parker (Tom Holland) was outed to the world as Spider-Man in a final act of revenge by Mysterio (Jake Gyllenhaal) and framed for Mysterio’s “murder” in London via a news broadcast by J. Jonah Jameson (JK Simmons).  With his life, and the lives of MJ (Zendaya), Ned (Jacob Batalon), and Aunt May (Marisa Tomei) turned upside down, Peter turns to Doctor Strange (Benedict Cumberbatch) for some magical help.  Strange has a spell that will make everyone in the world forget Peter is Spider-Man but Peter’s meddling causes unforeseen side effects and new threats from other dimensions.  This first trailer shows off some of the mind-bending visuals we’ve come to expect from Doctor Strange and the first official hint of legacy Spider-Man characters in the form of Alfred Molina’s Doc Ock, with a tease of Willem Dafoe’s Norman Osborn.  There’s no Tobey Maguire or Andrew Garfield yet but maybe that will be the money shot of the next trailer.  Spider-Man: No Way Home is out in theaters only on December 17th and you can check out the first trailer below.